Considering how many of us work in offices or have office equipment at home, it’s worth talking about EMF radiation from Xerox machines. Here’s a quick summary:

Xerox machines do produce EMF radiation, mainly in the form of bright light. This light isn’t harmful unless you stare at it for long periods. Wireless Xerox machines will use radio frequencies, which is a common cause for concern. From an EMF perspective, Xerox machines aren’t a big issue. 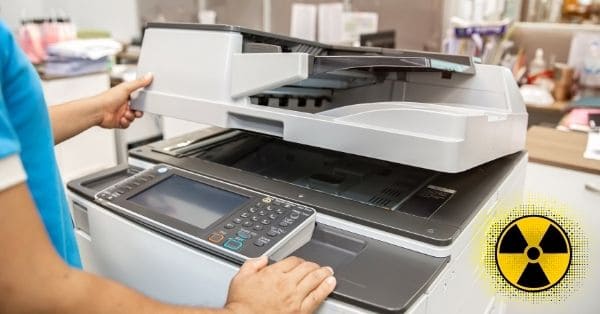 In this article, I’ll look at how Xerox machines work and the types of radiation they emit.

How do Xerox Machines Work?

Photocopiers, the more general term for Xerox machines, were invented in 1937. But in 1966, a small company called Xerox revolutionized the industry.

By this year, the technology offered by Xerox increased photocopying output from 20 million copies to 14 billion copies a year!

But how does a Xerox machine work?

Although it’s not completely relevant to know how a Xerox machine works, it’s useful for understanding the kinds of EMF radiation it produces.

Generally speaking, Xerox machines are fairly safe considering how much time we spend around them. Unless your job is to photocopy things all day, you shouldn’t be too concerned about this.

Unlike laser printers, which use a laser to change the charge on the printer drum, Xerox machines usually use static electricity. The printer drum is statically charged, which causes the powdered ink to stick to it.

This means that you can avoid one of the main EMF sources in office equipment, as the laser in a printer is a form of ionizing radiation. This can be harmful.

So for a Xerox machine, the main sources of EMF radiation are:

The only real danger from any of this is constant exposure to the bright light, which can damage your eyes. But this isn’t related to the EMF side of things; your eyes are sensitive, and this isn’t much different from staring at the sun.

As with many other devices, wireless Xerox machines are becoming more popular in offices. That said, the wireless functionality isn’t related to the photocopying, it’s related to the integrated printer instead.

Wireless printers communicate with computers and are useful in office settings because it means you don’t have to hook hundreds of computers up to the same printer.

If your Xerox machine has a built-in wireless printer then you should possibly be more concerned about EMF radiation. The printer will send out RF waves to communicate wirelessly, and have a laser for printing, as I mentioned earlier.

How to Reduce Exposure to EMF Radiation from Xerox Machines 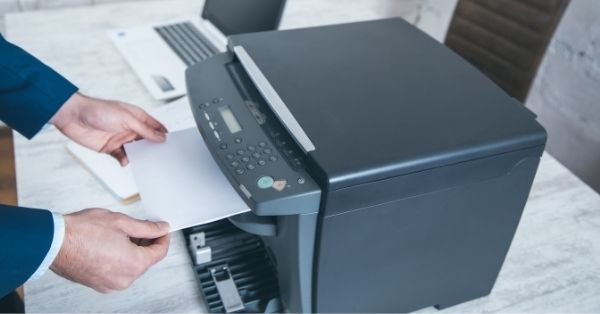 Although Xerox machines aren’t a massive cause for concern when it comes to EMF radiation, it’s understandable that you might want to reduce your exposure as much as possible.

If so, here are my top suggestions.

If you can, avoid Xerox machines with laser printers built-in. These 2 technologies are often integrated into office settings but try and avoid them if possible.

A study by Harvard University found that there are a number of health concerns associated with laser printing.

The only one of these that’s directly applicable to Xerox machines is respiration problems. As the ink is statically charged, there’s a chance it can end up in the air. This should only be a concern if you spend ages stood around the machine while it’s in use, so avoid this.

This might seem obvious, but always make sure the machine’s lid is shut when it’s in use. The scanning beam is incredibly bright and can hurt your eyes just by looking at it.

Prolonged exposure can be even more dangerous, so be extra careful if your job involves a lot of photocopying. In fact, I’d even go as far as to recommend stepping away from the machine while it’s in use, or at the very least turning your back.

If you’re using the Xerox machine for more than 15 minutes at a time, be sure to stand around 3ft away to avoid any issues.

3. Be aware that noise can make you tired

Spending a long time around a noisy Xerox machine can be very tiring. This isn’t just folklore, it’s been proven by science. Sure, this isn’t directly related to Xerox machines, but constant exposure to noise can lead to higher levels of fatigue.

The easiest way to get around this is to locate your Xerox machine away from workspaces, such as in a separate room. This is easier in an office than it is at home, but at home, you could use a spare bedroom as your office and keep the Xerox machine in there.

If you can’t keep the Xerox machine in its own room then be sure to step away when it’s working on big projects. The more of its light and noise you can avoid, the better you’ll feel.

As you can see, EMF radiation isn’t a big cause for concern with Xerox machines. If it’s got a built-in laser printer, things change slightly. Either way, you’re best to follow standard advice for EMF exposure and simply keep your distance as much as possible. This’ll help to avoid other health complications too.