I’m always concerned about locating and dealing with sources of EMF radiation around my home. If you’re the same then you’ve likely wondered about EMF from your flat screen TV. Well here’s a quick summary:

Also read: Do Smart TVs Emit Radiation When Turned off? 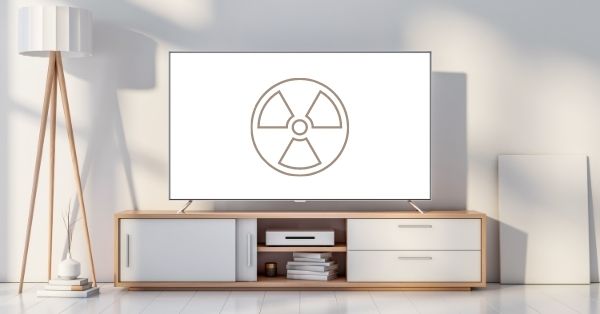 In this article, I’ll look at the different types of flat screen TV and how much EMF they emit. I’ll then suggest some ways you can get around this issue.

How Much EMF Radiation do Flat Screen TVs Emit?

Like all electronic devices, flat screen TVs do emit EMF radiation. A large portion of this is in the form of infrared radiation – heat energy that’s a by-product of the screen being powered.

When we’re talking about flat screen TVs, we’re referring to the following:

I won’t be discussing plasma TVs because these have generally been phased out by most manufacturers. If you still own a plasma TV, you can find information about their EMF levels elsewhere.

All types of flat screen TV emit some level of extremely low frequency (ELF) radiation, which is the same kind emitted by things like power lines.

But because TVs don’t use that much energy, their electric field is relatively small. Providing you sit more than 5ft away you should be fine.

Standard TVs don’t emit RF radiation, which is the type produced by Wi-Fi routers and cellphone towers. This is the type of EMF radiation that people are more concerned about.

Smart TVs, on the other hand, use radio frequencies to communicate with various devices. This is, after all, what makes them “smart”.

Your smart TV will definitely have internet connectivity and will likely also have Bluetooth connectivity so you can play music or videos from your phone on the screen.

One of the biggest issues with smart TVs is that you can’t completely turn off its Wi-Fi connection. Even if it’s not connected to the router, the TV still sends out signals looking for it.

This makes them a bigger cause for concern than something like a cellphone, which you can at least disconnect or turn off. Smart TVs use a range of screen technologies, but most will be OLED because this is a more economical technology to run.

Luckily, this also means you don’t have to worry too much about the EMF radiation coming from the screen because it’s fairly low energy.

In short, your main concern when it comes to EMF from a flat screen TV is radio frequencies associated with smart TVs. Almost every other frequency of radiation from the TV is low enough for you to not be concerned.

How to Avoid EMF from Flat Screen TVs 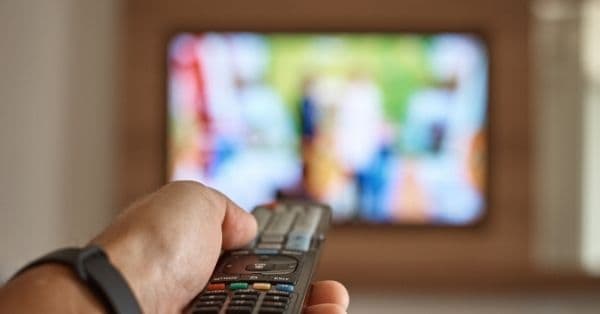 Once you’ve identified what type of flat screen TV you own, it’s worth figuring out what you can do to reduce your EMF exposure from it.

My first suggestion would be to buy an EMF meter if you don’t already have one.

Owning an EMF meter is really the only way to see if your actions make any difference to EMF levels in your home. It’s one thing for me to suggest solutions, but it’s another thing entirely for them to be useful in your home.

So start by taking readings from your TV to see how much EMF radiation it produces. Stay within 2ft of the TV to get the most accurate readings. After taking these readings, try some of these solutions below to reduce EMF exposure from your flat screen TV.

This is a no-brainer, but the easiest way to reduce your exposure is to keep your distance. Realistically this shouldn’t be too hard if you have a large TV.

EMF radiation follows the inverse square law, which means that at double the distance, the intensity of the electric field halves.

You should only need to be about 5ft from the TV for you to avoid the majority of the radiation from the screen.

For radio frequencies from its Wi-Fi connection, you’ll need to be at a distance of around 30ft, if not more.

2. Turn off the Wi-Fi on your smart TV

Some smart TVs will disable the wireless connection when you hook up an Ethernet cable. You can check this using your EMF meter.

However, some TVs don’t stop searching for a wireless signal, meaning you have to take more drastic measures. If setting up a wired connection makes no difference, you’ll need to open the TV up and physically disconnect the Wi-Fi connection.

While this isn’t the easiest thing to do, you can check out this video for a clear guide on how to disable Wi-Fi on your smart TV. When you set up a wired connection, buy an Ethernet cable long enough for you to keep your router at a safe distance.

3. Be careful with the type of TV you buy

This is less of a tip for the TV you currently own but is more advice about the next TV you buy. You might have already got the message, but steer clear of smart TVs. They really offer nothing you can’t get elsewhere.

For example, you can stream from a games console, which can be wired to your router, which reduces RF radiation.

A current model OLED TV without smart features will be the safest model because it’s low energy. Even so, be sure to keep your distance from it.

I found that EMF from flat screen TVs generally isn’t something to worry about unless you have a smart TV. Then it becomes a standard concern of RF radiation.

The best advice I can give is to just be careful with the type of TV you buy, and, as always, limit the number of wireless internet devices you have around the home.