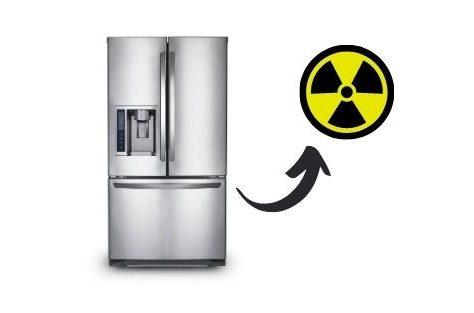 Radiation from home appliances is a common concern for a lot of people. I’ve often wondered whether typical home appliances, such as refrigerators, are a source for concern. Here’s a quick answer:

Modern refrigerators emit low amounts of EMF radiation because they contain few dangerous components. But if you own a smart refrigerator then you’ll be exposed to much higher levels of EMF thanks to its built-in Wi-Fi and Bluetooth.

Also read: Do Space Heaters Give Off Radiation?

Are Refrigerators a Source of EMF Radiation?

Refrigerators have long been one of the main targets of energy efficiency in the household. After all, they’re vital pieces of equipment that we use every day.

Older models of refrigerators used chlorofluorocarbons (CFCs) as their chilling agent, but these were found to be very damaging to the environment. This is primarily what led to their continued development.

As a result, modern fridges use around 10% of the energy of refrigerators from 30 years ago.

This means that, by extension, they emit much less EMF radiation. They have motors to run the cooling components, but this shuts off when they reach the right temperature.

A study by the Long Island Power Authority found that refrigerators emit around 1.5mG at a 1ft distance, which drops to less than 1mG at 3ft.

Considering how little time you spend this distance from a refrigerator, this shouldn’t be a problem.

This becomes a different issue if you own a smart refrigerator. Like other smart devices, they have Wi-Fi and Bluetooth connectivity, which increases their EMF radiation.

Both Wi-Fi and Bluetooth are common causes of concern in the EMF world, and it’s no different for smart refrigerators.

What’s more, most have an LCD screen for things like monitoring settings, checking recipes, and ordering food. Adding more electronic components into the refrigerator only increases its EMF radiation levels.

Perhaps the best thing to do is to measure your refrigerator’s radiation levels using an EMF meter (my favorite one reviewed). All models are different, and this’ll be the easiest way to get specific information.

Check the EMF radiation levels coming from your fridge, and if they’re comparable to those coming from your Wi-Fi router or other electronic devices, it might be time to do something about it.

How to Reduce EMF Radiation from Your Refrigerator

If you think your refrigerator is a cause for concern then it’s worth looking for ways to reduce your EMF radiation exposure.

Luckily there are a few things you can do. Here are my top suggestions.

1. Be careful where you place it

EMF radiation decreases exponentially over distance. Therefore, one of the easiest ways to reduce your exposure levels is to simply remain far away from the object.

While you can’t always keep away from your refrigerator, opening it a few times a day won’t have a significant impact on your health.

Just think carefully about where you place it in your kitchen.

For example, placing it near a wall will be a good idea, as much of the EMF radiation will simply be absorbed into it.

If your kitchen is near the outside of your home, place it as close to the exterior as possible.

If this isn’t the case, just ensure it’s away from living areas and at least 4ft away from your cooker, as this is where you’ll spend most of your time in the kitchen. 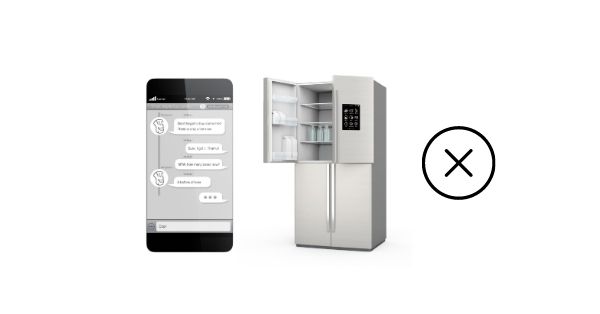 As I mentioned above, smart refrigerators are a much greater source of EMF radiation than normal versions, so avoid them at all costs.

A smart refrigerator really doesn’t offer any advantages. After all, why would you need Wi-Fi on the appliance that keeps your food cool?

Choosing an energy-efficient model like this one (Amazon link) will reduce this issue even more.

Older refrigerators will emit more EMF radiation than modern models. This is just one of the many reasons why it’d be a good idea to upgrade your refrigerator.

A refrigerator can last up to 20 years if treated well, but now would be a good time to replace it if your model is over 10 years old.

Getting one now will see you through the next 20 years hopefully. By then, who knows what the state of refrigerators will be like?

3. Use some EMF shielding paint

If EMF radiation is a big issue for you, and you don’t have the money to afford a new refrigerator, the next best thing would be to block the EMF radiation.

One of the easiest ways to do this is using blocking paint, such as YSHIELD’s EMF blocking paint (Amazon link). Check out my review.

This stops EMF radiation by forming a barrier on the wall. It’s pretty good stuff and will block almost all the radiation emitted by a device such as a refrigerator.

I’d recommend placing your refrigerator in an alcove or against a wall and then painting this stuff onto the wall behind it.

The more walls that surround the refrigerator, the more surfaces you have to paint.

The only other option for blocking EMF radiation is to build a Faraday cage, which would be impractical for a refrigerator, as you need to access it. Therefore, EMF blocking paint would be the best suggestion.

Although I don’t feel refrigerators are a prime culprit for EMF radiation in the home, they might still be a concern for those who are sensitive to radiation.

If that’s you, then I’d recommend making some slight changes around your home to reduce your radiation exposure levels.

The easiest thing you can do is to place it far away from your cooking area, as the biggest problem with radiation is length of exposure.