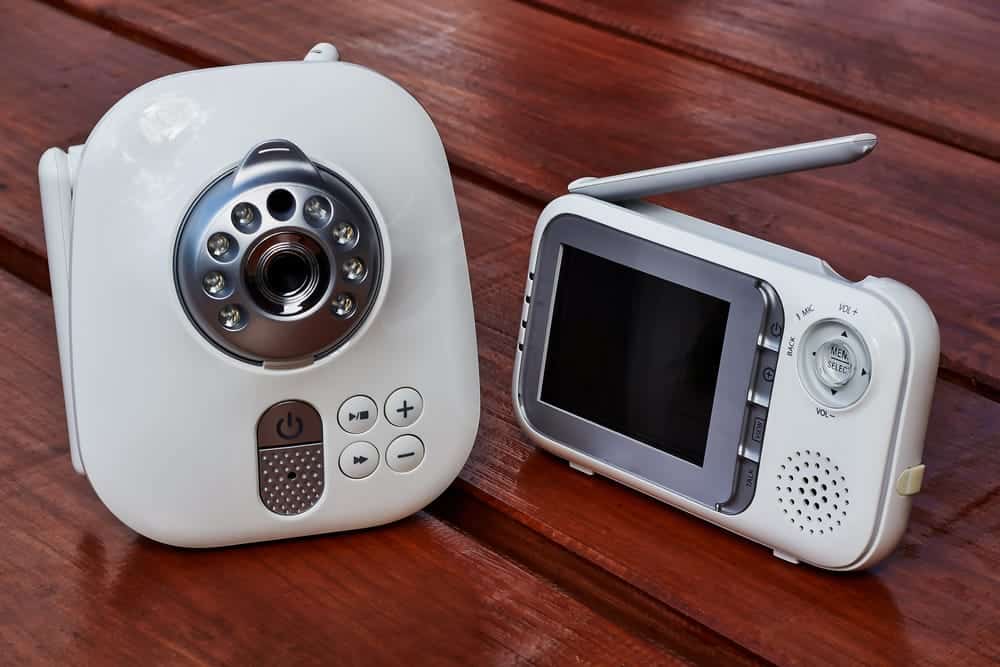 Baby monitors are an incredibly useful tool. However, I’ve had more and more parents asking me whether baby monitors emit EMF radiation. I decided to do some more digging on the subject to come up with the best answers.

I imagine it’s no surprise to learn that baby monitors emit radiation. However, I bet it’s a shock to learn they’re one of the worst devices in the home in terms of radiation levels. In this article, I look at why this is the case, and effective ways that you can combat this issue.

Why do baby monitors emit so much EMF radiation?

Baby monitors used to be simple, single channel walkie-talkie devices that left the channel constantly open both ways. However, with advances in technology, this is no longer the case and most are now wireless.

These new wireless baby monitors work in exactly the same way as your cell phone and WiFi router (links to my articles on cell phone and wifi radiation respectively). They basically blast out large amounts of short distance microwaves to communicate between the two monitors.

Often, this is because they connect to your home WiFi, but they might also run monitor-to-monitor depending on the technology. Either way, they run at frequencies between 0.8 MHz and 2.4 GHz, which is the same as the microwave oven in your kitchen. Read my article on radiation from microwaves.

The biggest difference between these devices is the amount of power they emit. So don’t think it’s like putting your baby in the microwave; it’s more like putting the microwave next to their bed and then heating up your dinner. Still not ideal, right?

The other big problem is that babies are much more at risk from EMF radiation than adults. This is for all the normal reasons, such as them being smaller, not properly developed, thinner skin, etc. Therefore normal safe distances need to be increased in the case of babies.

Most modern baby monitors use either DECT or FHSS technology, which are basically acronyms for the different wireless tech they use to communicate with each other. It’s not really important what they stand for, as long as you know to avoid them when possible.

Luckily, there are things you can do to reduce the risk of exposure for both you and your baby. I’ll cover these later in the article, but first it’s worth knowing a bit more about the dangers of EMF radiation for babies and children.

The dangers of EMF radiation for babies

It’s fair to say that EMF radiation can be a danger to anyone, but this is particularly true for babies. Some of the potential symptoms of EMF exposure can include:

As I mentioned, these problems are a problem when it comes to children and babies because their brains and bodies are still developing. This leaves them open to health complications relating to EMF exposure.

Also, not much research has been done in this field, and even less has been done on the impacts of EMF radiation on children. Therefore, until more information is available, I feel it’s best to be on the side of caution and take measures to reduce your baby’s exposure to potentially harmful EMF radiation. 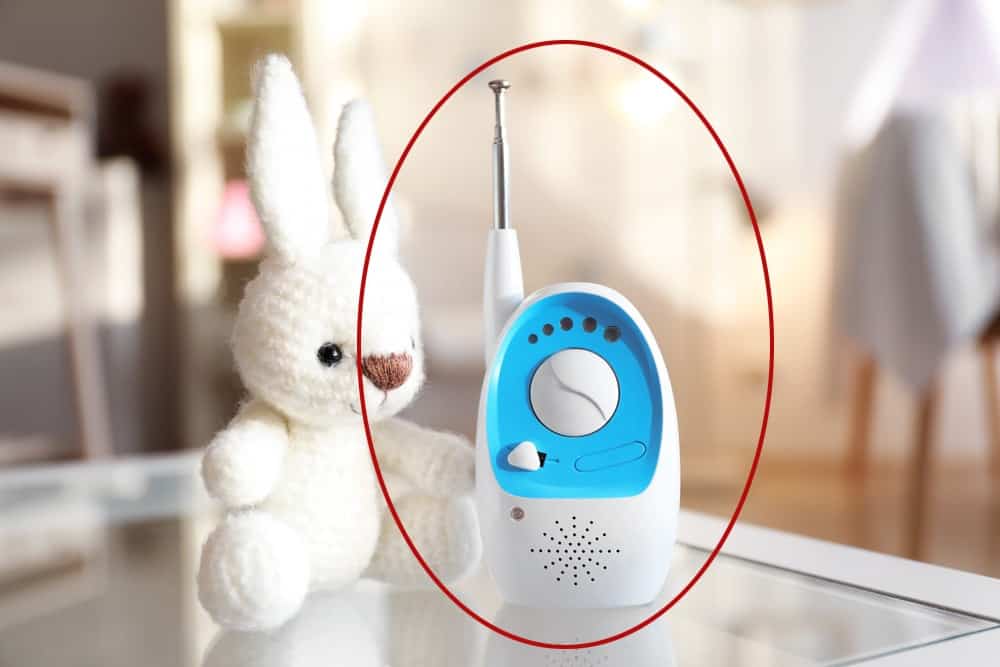 There are several solutions for combating EMF radiation from baby monitors, but each comes with its own advantages and disadvantages. Some will be more practical than others, depending on your needs.

Read the following list to see your options and then decide what works best for you. I’ve tested these solutions with my EMF radiation meter, so I know that they’re all pretty practical solutions. However, I’d recommend you get your own meter so that you can take specific readings in your own home.

The easiest solution is to just get rid of baby monitors completely. That way you won’t have to worry about the potential dangers of any extra EMF radiation around your baby. Our parent’s generation were one of the first to have baby monitors of any kind, so it shows how long humans did without them!

Obviously, I understand that this might not be the most practical solution for all parents. There are genuine reasons why having a baby monitor is helpful. However, if you can get away with going back to old fashioned parenting (namely checking on them in person), then I’d definitely recommend it.

If you don’t feel you can go without a baby monitor, then you have to accept that there’s likely going to be some level of EMF radiation present in your child’s bedroom. In this case you’ll just have to find ways of reducing it to the lowest possible levels.

That might be an intimidating way of putting it, but it’s true. If you have to have a baby monitor in your child’s room, remember to avoid FHSS and DECT technologies, which are present in most standard model wireless baby monitors.

DECT and FHSS essentially refer to different wireless technologies, both of which operate at specific frequencies. As I touched upon earlier, these are similar to the frequencies used by devices like cell phones and microwaves, and are the source of most of the concern around baby monitors.

This kind of information isn’t necessarily hidden, but you might need to dig around to find it when shopping for a baby monitor. All manufacturers will need to state the technology their baby monitor uses, but some might not make it too obvious.

That’s why I’ve stated the above acronyms several times: if EMF radiation is a concern of yours, be aware of them and keep a look out for them. Your first step should simply be to avoid all baby monitors that run on this kind of technology.

Many manufacturers have started to produce low EMF emission baby monitors as more people are becoming aware of the potential dangers. These will either be analog monitors, or low emission digital monitors.

Low emission analog baby monitors like the Safety 1st Crystal Clear Audio Monitor (Amazon link) are just a rebranded version of the original technology. After all, it did a pretty good job. Digital monitors, on the other hand, run on different frequencies that avoid the need for harmful microwaves.

Just remember, low emission baby monitors still give off EMF radiation (the clue is in the name). Therefore, even if you switch to a low emission model, keep it a good distance from your baby’s crib, and only use when needed.

4. Limit your use of the baby monitor

Another practical solution to reducing exposure to EMF radiation is to limit how much you use the device. Again, this might not be the most practical solution, but it’s definitely possible to find a good balance.

This point is based on the principle that baby monitors emit radiation whenever they’re on. So, logically, the more they’re turned off, the less radiation you’re exposed to. You’ll just have to find a plan that works for you.

Another solution, and one that more parents are leaning towards again, is to have your baby sleep in your room. This avoids the need for baby monitors altogether because they’re right there with you!

5. Use an EMF radiation blocking cage

Most of you will probably know that a Faraday cage is designed to block EMF radiation from escaping it. Usually, this means blocking all frequencies, including the useful ones that the device runs on. When you have a device like a baby monitor, this obviously isn’t too helpful.

However, this can be solved by choosing a Faraday cage that doesn’t have a lid, as this allows EMF radiation to escape, but in a direction of your choosing. What’s more, this also means you don’t have to buy a specific cage, but can use something you’ve already got at home.

Believe it or not, a steel waste paper basket does a pretty good job. Even better is that it can double as a bin when not in use! Steel is a conductive metal that prevents EMF radiation from escaping, but using a waste basket means you’ve still got a pretty big opening at the top.

Alternatively, any conductive metal mesh box you have will also do the job. This could be a condiment caddy, or a toiletries holder; just as long as it’s made from something like steel.

All you need to do is put the baby monitor inside the metal container and then put it on a surface higher than your baby’s crib. This is so that the opening through which the radiation is escaping isn’t pointing at your baby.

Similarly, make sure the baby monitor is at least 6ft away from your baby. Realistically, this should be the case regardless, but it’s even more important here because I’ve suggested this on the basis of using your existing baby monitor.

A final solution, which isn’t the most practical, is to use wired cameras to monitor your baby. These still give off EMF radiation, but similarly to analog devices, it’s nothing compared to that emitted by wireless baby monitors. You’ll obviously need to install cameras and wires, and some kind of monitor to watch it on.

As more people wake up to the fact that baby monitors emit massive amounts of EMF radiation, more solutions are becoming available. However, don’t take low emission monitors as a given, as they can offer their own range of problems. The best advice I can give is to use this information as a starting point, and to do plenty of your own research.

Thanks for reading! Check out all my recommendations for EMF protection.