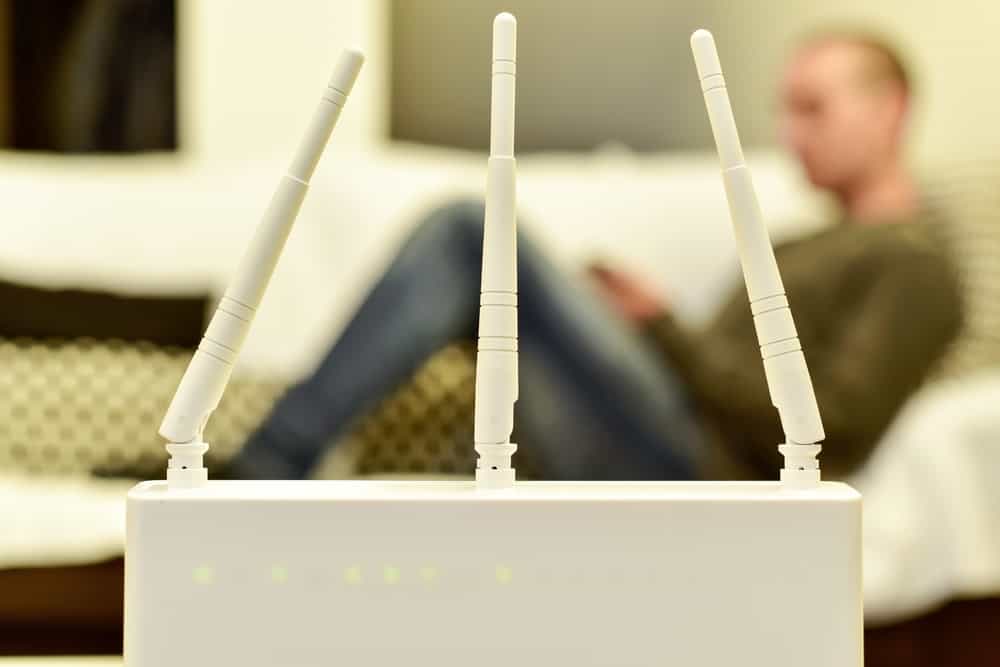 We all know that WiFi routers are something we can’t live without, but surely there must be ways to protect ourselves against WiFi router radiation. A friend of mine suggested putting distance between yourself and the router, so I decided to see if this would work.

While every WiFi router gives out different levels of radiation, a standard safe distance to avoid WiFi router radiation is between 15 and 20 feet, increased to 30 feet for children. Ideally, one should always be more than 10 feet away but the best way to test is with an EMF meter.

Obviously, there are some situations where you won’t be able to put 20 feet between yourself and your WiFi router, so along with explaining more about this radiation, I look at ways around this problem. Read on to find out more.

As an affiliate, I may collect a share of sales or other compensation from the links on this page.
Before I proceed further, I highly recommend you take a minute and check out these critically acclaimed ebooks – The Non-Tinfoil Guide to EMFs by Nicolas Pineault and Long Term EMF Protection by Lloyd Burrell. These books have helped me tremendously and I can assure you that they will be worth your while. I also recommend Nick’s EMF Protection Course which is a great resource for EMF protection.

WiFi routers, like all electronic devices, give out electromagnetic radiation (EMF radiation). This is a problem because it gives out radiation at low GHz frequencies, which can have negative health impacts if you’re exposed to them for too long.

However, scientists are still figuring out what the long-term health impacts of EMF radiation are, with the biggest drawback being that we haven’t been using the technology for long enough to know these impacts. That said, one of the biggest concerns with WiFi is that most people leave their routers on 24/7, meaning they’re constantly exposed to the radiation.

The normal 2.4GHz frequency of WiFi routers is able to pass easily through walls and other obstructions, which is great for your signal, but not so great for your health. This consequently means you’re exposed to EMF radiation in your home, which can have a range of health implications.

However, the EMF radiation that we’re concerned with will usually travel about 20ft from the router, and will obviously get weaker with distance. When I tested this in my home using my favorite EMF meter  (REVIEW), the radiation strength of the router was 100 times weaker when I was stood 20ft away.

Different countries have different definitions of safe EMF radiation levels. Most countries suggest between 100 and 350 micro-watts per centimeter squared, but the USA goes as high as 1,000. However, I don’t consider these levels particularly safe, and would suggest trying not to expose yourself to anything higher than 60 micro-watts per centimeter squared, which will be around 10ft from your WiFi router.

Children, of course, are more sensitive to EMF radiation than adults, so to be on the safe side you should consider doubling the safe adult distance for children, which would put it between 30 and 40ft. This might be difficult to manage in most homes, but that’s when you have to be careful with your router placement.

Read my article on the effect of WiFi radiation on babies and children.

The problem with giving an advised safe difference is that it’ll be different for every router, as their power and coverage can vary massively.

For example, a commercial WiFi router will be much more powerful than a domestic one, meaning it’ll kick out more EMF radiation.

Just bear in mind that these distances are general, and should only be a starting point. I’d recommend not only finding out your own readings, but also installing other measures to deal with the EMF radiation, or being careful in your WiFi router placement. 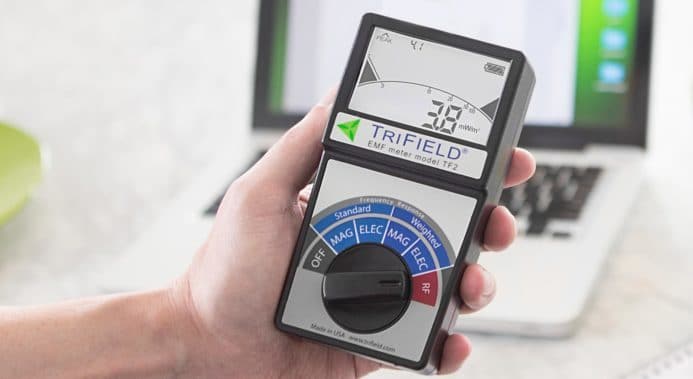 The easiest way to test for yourself what the safe distance is in your home is to use an EMF radiation meter. I recommend the value for money Trifield TF2 (see it on Amazon). Also, read my review where I explain why it is worth every penny.

EMF meters measure in micro-watts per centimeter squared, and a low (normal) reading for a home is around 9. Either way, it’s best to get an ambient reading for your home before testing, as this will give you a starting point.

Here is the easiest way to test your WiFi router for EMF radiation:

You might find through this experiment that it’s going to be difficult for you to put enough distance between yourself and the router. If this is the case, then you’ll need to try something else, such as using an EMF shield. I suggest the best ways to work around WiFi router radiation below.

Perhaps you live in a smaller apartment and will have difficulty putting 20ft between yourself and your WiFi router. If you don’t think you’ll be able to work with this kind of distance, try one of these suggestions below to reduce your exposure to WiFi EMF radiation.

1. Place your router in a corner

General advice for good router placement is to put in a central location where it can provide the best coverage. However, this obviously doesn’t work with EMF radiation exposure, so consider moving your router.

If you’re not going to try any other methods, the best thing you can do is put it in a corner of your house, ideally furthest away from your bedroom. If nothing else, this means your overall exposure will be lessened, but this definitely won’t be the most effective method. What’s more, it’ll obviously affect your signal strength.

2. Turn your router off

One way to solve the problem is to simply turn your WiFi router off whenever possible. After all, no power means no radiation. At the very least you should do this at night when you’re sleeping because this will have a massive impact on your overall exposure.

If you decide to go with this option, putting the WiFi on a timed or remote switch will also help because it means you don’t even need to go near the router to turn it off. Hopefully placing it out of the way and reducing the length of time it’s on will help with your exposure levels.

In my article on ‘turning off WiFi at night‘, I explain in detail the health benefits of this habit and easy ways you can disable WiFi at night.

Along with signal boosters, you should also avoid high-powered WiFi routers, as some claim to provide signal for up to 500 feet! This is far too much for a home and clearly produces much more EMF radiation.

Similarly, signal boosters and WiFi repeaters are designed to create a more expansive network across your property. However, this means much more radiation, so it’s best to keep your coverage and devices to a minimum.

4. Get internet the old fashioned way

Realistically, the best way to avoid EMF radiation from a WiFi router is to just get rid of it and return to an Ethernet connection. This shouldn’t be too hard to arrange in most homes, and you shouldn’t have too much problem connecting your standard devices to it.

What’s more, Ethernet is more reliable and provides better download speeds. However, this obviously means you won’t be able to wirelessly connect your devices to the network, so it might not be the most practical option.

5. Get a WiFi router cage 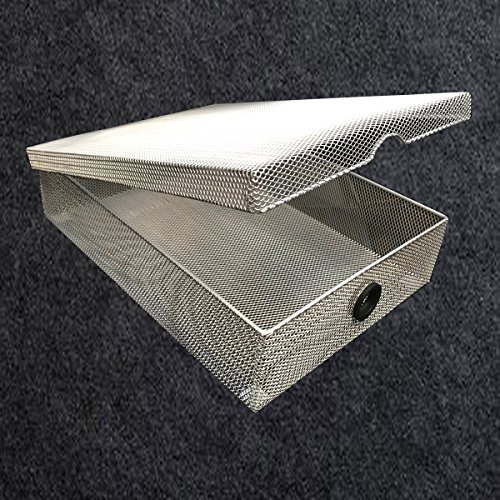 There’s a growing market for WiFi router cages or guards (check price on Amazon), which are essentially Faraday cages for your router. These block out approximately 95% of the router’s EMF radiation, and luckily have very little impact on signal strength. I tested one on my router and was still able to get signal everywhere in my house.

So, a base figure for safely avoiding WiFi router radiation is a distance of around 20ft. However, it’s important to note that this will vary between routers, so always be sure to test yours before making any changes to your setup. Reducing your exposure to WiFi EMF radiation is pretty easy once you’ve got the facts, so get measuring!

Thanks for reading! Check out all my recommended products for EMF protection.