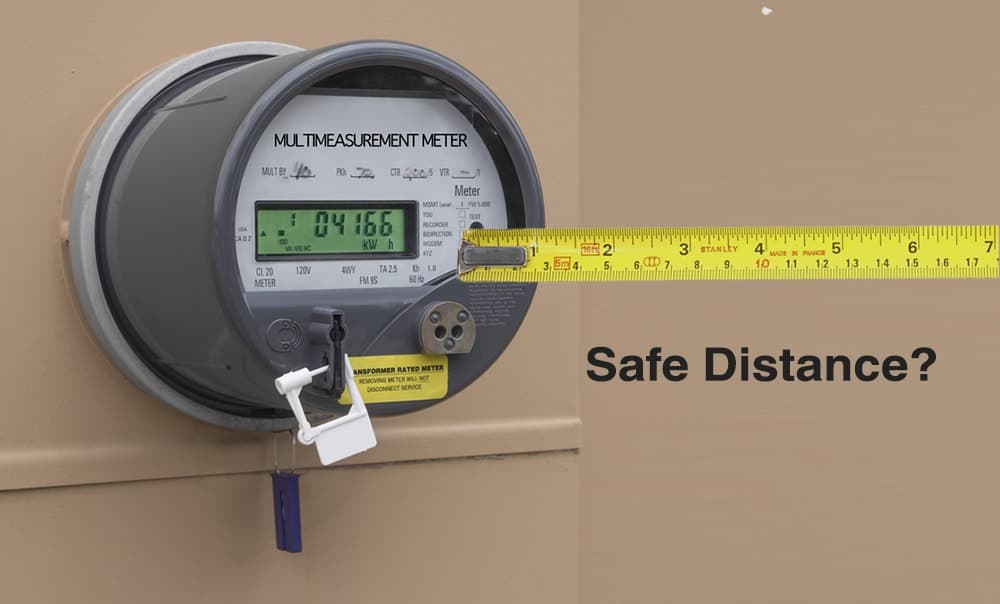 Many houses have upgraded their original meter to a smart meter – whether they want to or not. I regularly get asked about safe distances to be from a smart meter, so I decided to do some investigation to get the best answer. Here’s what I found out.

The minimum safe distance from a smart meter is 40 feet, although this figure is lower if there are walls or other obstructions between the human body and the meter. The best advice is to install the meter as far as possible from the living area or to fit an EMF shielding.

I understand that many people won’t be able to put a 40 feet distance between themselves and their smart meter, but luckily there are ways around this. In this article, I’ll look into smart meter radiation and the ways you can reduce it in your home.

Why is smart meter radiation a problem?

Smart meters – like any other electrical device in your home – give off something called radio frequency (RF) radiation. This is the same type of radiation given off by cell phones and microwaves but is up to 160 times stronger in a smart meter.

Overexposure to this kind of radiation, which is generally not a problem in small doses, can include the following health impacts:

Although there have been many studies into the effects of EMF radiation, there are currently no conclusive results. The WHO lists EMF radiation as a possible carcinogen, but the trouble is that these devices haven’t existed long enough for in-depth long-term studies to have been performed.

This is particularly true of smart meters, which have only been around for a few years and have been in the majority of people’s homes for even less time. Also, unlike cell phones, it’s much more difficult to cut smart meter radiation out of your life.

There are 2 main reasons for this. First, smart meters are stationary, meaning you have to move instead of moving the meter. Second, smart meters are never turned off and are constantly communicating over Wi-Fi networks.

So, unlike other electronic devices that you can switch off or move away from, smart meters are static and always turned on. Obviously the best thing to do is to observe the minimum safe distance (40 ft), but if this isn’t possible then it’s worth installing some shields.

The reason radio frequencies are used for communication is that they have the potential to travel large distances, although this depends on a number of factors such as wavelength or the device’s power.

Smart meter radiation can realistically travel further than 40 feet, but this is regarded as the minimum safe distance to be from the device on a regular basis. Also, EMF radiation can penetrate walls fairly easily, although this does have an impact on how far the signal can travel.

A good example to demonstrate this is using Wi-Fi. Everyone reading this has probably had an issue with their Wi-Fi at some point, particularly if there’s a thick wall between your device and the router.

While the signal can travel through a wall, it’s noticeably weaker. This is because the walls attenuate the Wi-Fi signal, which reduces its strength. Exactly the same is true for the radiation given off by smart meters, as both devices use the same kind of signal.

What’s worth bearing in mind, though, is that there isn’t really a single answer for all smart meters. The technology has changed rapidly in the time it’s existed, and all installations will vary in some way or another.

For example, radio frequency signals from older smart meters probably won’t travel as far as signals from newer smart meters, but the older devices will likely give off more EMF radiation in the form of heat or other wasted energy.

By far the best thing to do if you’re concerned about how far your smart meter’s radiation will travel is to buy an EMF meter. You can then use this to test your home and device to get the specific answers you need.

Why is the distance from a smart meter important?

As mentioned above, the best way to combat smart meter radiation in your home is to put some distance between yourself and the device. But why is distance so important?

Simply put, EMF radiation signals get weaker the further away from the device you travel. While there are several different ways of measuring this factor, the one that’s most relevant for home appliances is the inverse cube of the distance.

This basically means that at double the distance from the device, the intensity of the radiation will be reduced to 1/8th. This isn’t a hard and fast rule but is generally the case for household electrical equipment.

While smart meters do emit more EMF radiation than other household appliances, you can expect the signal intensity to drop to at least half at double the distance. So, this is why distance is so important: it’s the easiest way to reduce the signal’s intensity without further action.

How to reduce smart meter radiation in your home

Unfortunately, not everyone is lucky enough to be able to put 40 ft of space between themselves and their smart meter. For example, in my friend’s home, their smart meter was installed in their living room! Therefore it was necessary to think of other solutions.

Luckily this is a common enough problem for there to be a number of solutions available on the market. Below are my top suggestions for how to reduce the level of smart meter radiation entering your home. 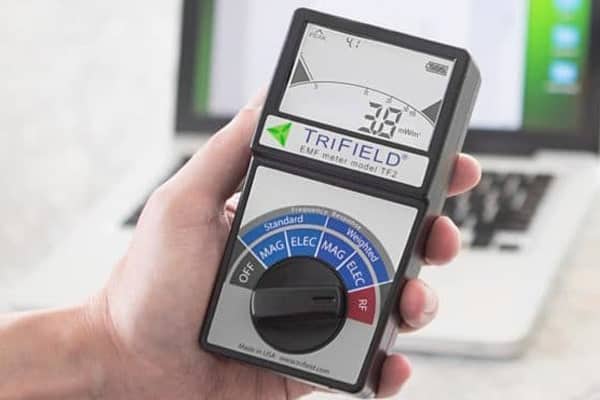 This EMF meter (Amazon) is a really good choice because it measures a number of different frequencies and is fairly easy to use. While it might not be the cheapest on the market, it certainly gets the job done well. Check out my hands-on review.

2. Build a shield around your smart meter

Possibly the most effective solution for combating smart meter radiation in your home is to build an EMF shield around the device. You can either buy a premade shield or build your own from something like this shielding fabric.

If you’re looking for a premade shield, you can try something like the ones made by Smart Meter Covers. As the name indicates, these are designed specifically for this purpose and definitely get the job done. Check out my review to know why I think this one is the best.

However, if you’d like to build your own, check out this handy DIY guide. It’s really not a difficult thing to build and can be quite a satisfying project.

These cages are basically miniature versions of a Faraday Cage, which are often used in places such as power plants. Although electricity converters are much more powerful than a smart meter, the science is the same.

Whichever you choose, always make sure the cage is grounded. This is necessary because it dissipates the EMF radiation back into the earth, and doing so can reduce radiation levels by up to 98%.

3. Place a shield behind the smart meter

Along with putting a cage on the outside to protect against EMF radiation, it’s also worth putting a shield between the smart meter and the wall it’s fitted on. In most cases, this will be an external wall of your home, meaning EMF radiation is entering the property.

You can really make this shield out of any kind of metal, providing it’s conductive. However, I’d recommend using a fine mesh sheet or thick kitchen foil, as this will reflect much of the radiation away from the wall.

To make it even more effective, ensure you ground the shield. This really isn’t difficult; you just need to have a length of conducting wire running from the metal sheet to a metal peg in the ground. Doing this will help to transfer most of the radiation into the ground.

Is it worth using EMF paint?

Although EMF paint does have its uses, it’s not something I’d recommend in this situation. The best option for reducing the level of smart meter radiation entering your home is to build a cage or shield around the device.

The main goal is to simply earth or reflect as much EMF radiation as possible. While options such as EMF paint do help to block some radiation, it’s not going to be the most practical solution in this instance.

Although the minimum safe distance from a smart meter is at least 40ft, this isn’t practical for everyone. So if you can’t put that much distance between yourself and your smart meter, then try one of the solutions listed above. These are much more practical and will achieve some good results.