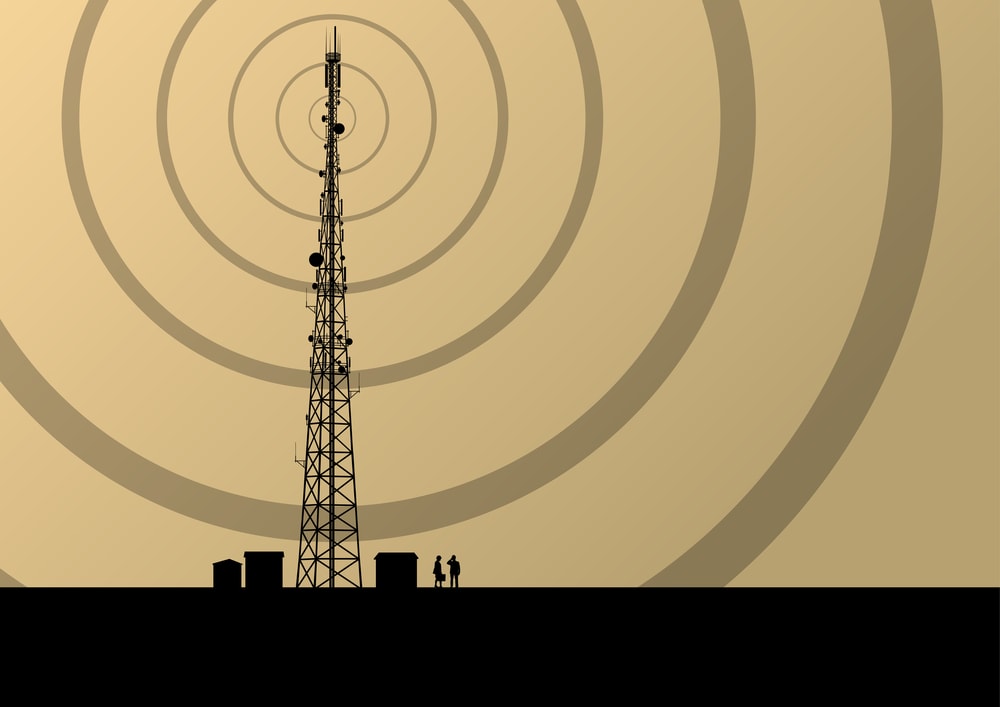 Living near a mobile tower isn’t the best for a number of reasons, most notably the radiation it emits. To get a better understanding of how to deal with this issue, I decided to investigate the safe distances for avoiding mobile tower radiation.

So, what are safe distances for avoiding mobile tower radiation? While all mobile and cell phone towers give out different levels of radiation, a minimum safe distance to avoid the worst of it is under 150ft, and after around 500ft, radiation levels will be minimal. However, the best way to test for yourself is with an EMF radiation meter.

Mobile towers work differently to other EMF-emitting devices, such as a WiFi router, and so have different ways of looking at minimum safe distances.

In this article I explain in a bit more detail the easiest ways to calculate the minimum safe distances, and ways you can reduce your exposure.

Mobile towers use radio frequencies to provide us with cell phone coverage. This is what we consider to be useful EMF radiation, but other forms given out by the tower, such as heat or microwaves, are considered useless.

These are the areas of EMF radiation we’re concerned with when we talk about avoiding it. However, the useful radio frequencies are also potentially harmful to us, so it’s best to just avoid living near a mobile tower if possible.

The first useful thing to know is that not all mobile towers do the same job. For example, there are receiving towers and transmitting towers. These will also typically radiate at different frequencies. Some towers might operate at 2.3GHz, whereas others might be as low as 800MHz.

Typically, mobile towers working at a higher frequency will produce more EMF radiation, so these are the ones we should be concerned with. You also have to factor in things like the amount of antennae pointing at your house, as the more antennae, the more radiation.

The other important thing to consider is the way mobile towers work. They’re typically tall in order to reach over buildings, and produce the signal in beams or pulses. Because of the way the antennae are designed, you end up with something called a shadow zone.

The shadow zone is essentially the area in which you’re under the tower’s radio waves, and therefore are exposed to much less radiation. The first “radiation lobe” (the beam of the mobile tower) lands around 150ft, which is where EMF radiation is strongest. 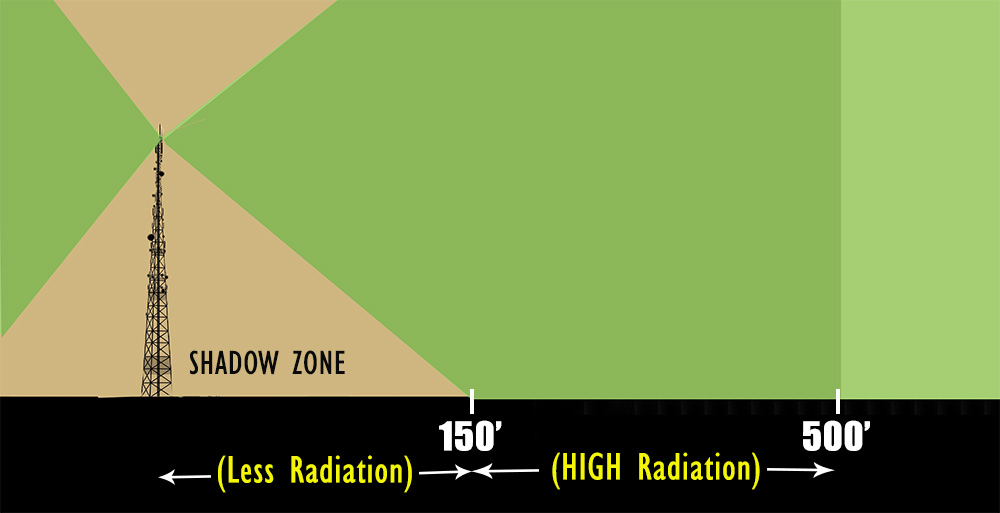 After that, there’s a direct correlation between distance and radiation intensity. So, the farther away from the tower you are, the less radiation you’re exposed to. By the time you reach around 500ft, you’re definitely away from the worst of the radiation.

However, as I mentioned above, not all mobile towers produce the same levels of EMF radiation, although the principle of radiation lobes and shadow zones remains true.

The easiest way to know the specific safe distance from your local mobile tower is to get out there and test for yourself.

Arguably the best way to find out the appropriate safe distance from a mobile tower is to test it for yourself. To do this you need to buy an EMF radiation meter (Amazon link), which are easy to get and not too expensive. If you don’t already own one of these, then hurry up. They’re your number one tool for EMF radiation projects.

Check out my top recommendation (article) for EMF meters.

Also, it almost goes without saying, but you’ll need to do all of these tests on foot, ideally with as few electronic devices on you as possible. Anything you carry, such as a cell phone, will impact your results.

So, to test the safe distance from your local mobile tower, do the following:

Finding out for yourself how far away from a mobile tower you need to be to avoid radiation isn’t the easiest experiment. For example, testing in an urban area will cause problems with your readings, not to mention that you might not even be able to walk in a straight line!

However, the safe distances I advise above are a pretty good rule of thumb, which should save you a bit of walking and measuring. If you want to be completely accurate, definitely test for yourself, but knowing that you shouldn’t go closer than 500ft is a pretty good rule to work by.

One of the major issues with mobile towers is that living near one means you’re constantly exposed to its radiation field. If this is the case, then I’d recommend taking steps to reduce your overall exposure time.

The easiest way to reduce exposure to mobile tower radiation is to simply increase the distance between you and the object. This is obviously fine if you don’t live near a mobile tower, and should always be your first option.

If you have no option but to live near a mobile tower, or there’s nothing you can do to increase the distance between you and it, then you need to look at other ways to reduce your exposure to EMF radiation.

While the long-terms health effects of EMF radiation exposure still aren’t known, this is even more reason to take preventative measures. After all, it won’t be much help to us if they realize in 30 years that living near a mobile tower is bad for you, during which time we’ve done nothing about it.

So, if you do find yourself living near a mobile tower, try some of these suggestions for reducing your exposure to its potentially harmful EMF radiation.

This might seem obvious, but along with putting distance between you, reducing the amount of time you’re even near the mobile tower will do wonders. For example, if you work near a mobile tower, see if it’s possible for you to move within the office to another side of the building.

Of course, this option might not be too practical in your home, but you can go about it the opposite way. By this I mean plan your home so that the rooms you use the least are closest to the mobile tower, whereas your frequently used rooms should be on the other side of the house.

There are plenty of different EMF shielding products you can buy for the home, ranging from Faraday cages for smart meters to EMF blocking curtains. Installing some of these in your home should make a noticeable differences to the levels of EMF radiation you can measure.

The best thing to do here is to concentrate on the side of the house closest to the mobile tower. Also, because the radio waves are coming at you from a downwards angle, consider paying attention to your roof too.

Not only will this be a major inlet of EMF radiation, but under the roof is also a great place to hide some heavy-duty blocking materials.

Another viable option are EMF blocking canopies (GUIDE) for your bed. After all, if you work, it’s likely that you’ll be spending most of your time at home in bed. Therefore concentrating on shielding your bed is much more useful that trying to shield the whole side of the house. 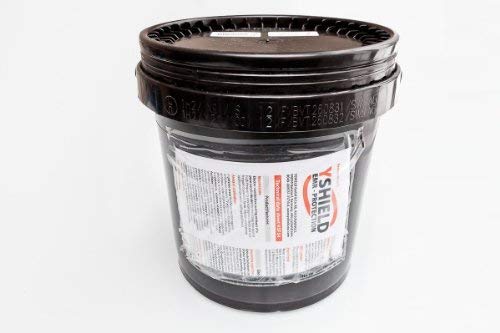 EMF shielding paint, such as YSHIELD (Amazon link), is an excellent product for drastically reducing the amount of EMF radiation that passes through a wall. It works by creating an impermeable barrier with high attenuation, which blocks almost all EMF waves.

However, this stuff can get pretty expensive, so be clever with where you paint it, and focus on problem areas.

During my research into safe distances for avoiding mobile tower radiation, I found that it’s more complex than discussing other forms of EMF radiation.

The shadow zones around a mobile tower are definitely worth remembering, but so is the fact that not all mobile towers are the same. It’d be best to use these distances as a rough guide, but to get your own measurements for confirmation.