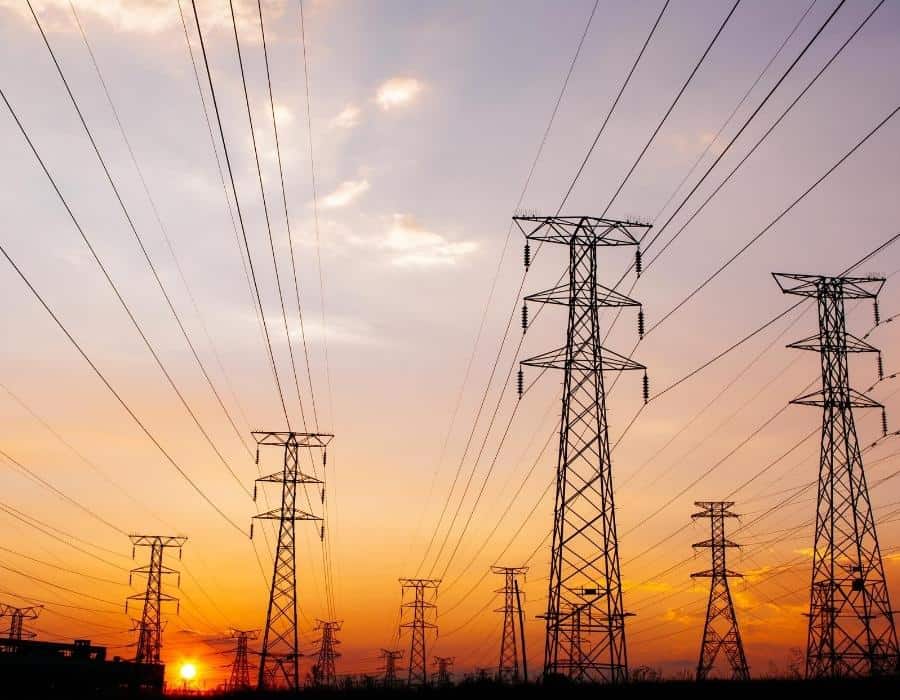 When it comes to sources of EMF radiation, power lines are probably one of the most concerning. If you’ve ever wondered how to measure EMF from power lines then you’re in the right place. Here’s a quick answer:

The easiest way to measure EMF from power lines is to simply use an EMF meter. These are really easy to buy online and are quite accurate. However, there’s also a mathematical formula you can use instead. For this, you’ll need to know the current and geometry of the lines.

In this article, I’ll look at how you can measure EMF coming from power lines, and also the best ways to reduce your exposure.

All electronic devices emit some kind of electromagnetic frequency (EMF) radiation. This is obviously also true for power lines, as these are what supply our homes with electricity.

The difference worth noting with power lines, however, is that their currents aren’t the same as electricity in the home. Power lines carry high-voltage electrical currents, whereas household devices operate on comparatively low voltage.

When an electrical current passes through a wire, it produces both an electrical field and a magnetic one. While both have their own potential dangers, the magnetic field is more concerning because of its ability to penetrate the human body.

The magnetic field created by an electrical current can vary. It’s dependent on several factors, including:

These factors are true for any EMF field but are worth noting in regards to power lines for a number of reasons. Most importantly, power lines carry large amounts of current at high voltage, meaning their EMF fields are quite large.

For example, high-voltage power lines can emit EMF radiation up to 1000ft, although the intensity will be vastly reduced by this point. Either way, it’s definitely something worth paying attention to.

In my experience, power lines were arguably one of the first causes of concern when it came to EMF radiation. In fact, even people who aren’t particularly knowledgeable on EMF radiation will pull a face when you mention power lines.

The first evidence for the health dangers of power lines appeared in 1979. In this study, the researchers found that living next to power lines for an extended period of time increased participants’ chances of developing cancer, particularly leukemia.

However, exposure to EMF radiation has been linked to a number of other health issues, including:

In short, there’s plenty of reason to be concerned about the potential health impacts of EMF radiation exposure. The reason this is true for power lines is that, as mentioned above, the EMF fields are much more intense than with something like a cellphone.

Powerwatch UK conducted a literature review of over 300 studies relating to EMF exposure and power lines. They found that 200 studies mentioned a link between EMF radiation and negative health complications.

Perhaps the biggest issue with power lines comes from the length of exposure. If you live near some, you’re going to be exposed to their EMF fields whenever you’re at home.

Also, unlike electronic devices, you’re not able to turn this source of EMF radiation off. Therefore it can be helpful to measure EMF radiation levels from power lines so you can find an acceptable and safe place to live.

How to measure EMF from power lines

When it comes to actually measuring EMF radiation levels from power lines, the easiest way to do it is with an EMF meter. These are also known as gauss meters, and they’re fairly easy to source.

If you don’t already own one, then I’d recommend buying the Trifield TF2 (check price on Amazon) for this job. I recommend this one because it’s designed for use with high EMF radiation levels, as some other meters might not register high enough. Check out my review.

Once you’ve purchased your EMF meter, follow these steps:

I’d also suggest testing it against some low and medium EMF sources, such as cellphones, laptops and Wi-Fi routers. Again, this is to ensure you know what kind of readings to inspect when testing the power lines.

2. Decide what you want to measure

This might seem obvious, but decide what you’re going to measure and what readings are important.

For example, measuring EMF radiation as close as possible to the power lines might be interesting, but it won’t be useful if you don’t live directly under them.

Therefore, it’s probably most useful to know what EMF levels are like in your home, or other areas close to power lines where you might spend a lot of time.

There are a couple of different measurements you can use here:

Electric fields is probably the most relevant here. For example, a TV can produce 10V/m, which is considered within safe levels. Power lines, however, can produce upwards of 10,000V/m!

Once you’ve decided where you’re going to take your measurements, you need to take them. This is fairly easy because you just need to turn your EMF meter on and see what the screen says.

The EMF meter I recommended above takes measurements in the 3 fields I discussed, so you can get a good, well-rounded idea of EMF radiation levels from power lines.

Walking towards the power lines with your EMF meter turned on will demonstrate how drastically it can increase. Short exposure to this EMF radiation won’t be harmful, so it can be worth doing just for interest’s sake.

That’s basically all there is to measuring EMF radiation from power lines using an EMF meter. However, it’s what you do with this information that’s important.

For example, it might be enough to decide whether you move house, or whether you only need to install some EMF blocking measures in your home.

Either way, you can expect to get readings for up to 1000ft away from high-voltage lines. The ones entering your home operate on lower voltage, so these are definitely less of a concern.

If you don’t have an EMF meter then you can calculate fields from power lines using a bit of math. For this, you’ll need to know the geometry of the power lines, along with their current.

Among the measurements you’ll need to know are the length of the lines and their height from the ground. However, this height is generally set at 1m, rather than the actual height.

This is because most international standards concerning power lines use 1m, as EMF fields around power lines can vary by height. As a result, it’s necessary to establish a fairly set height.

However, this starts to get fairly technical and requires information that you might not be able to access. So, if you don’t have a degree in physics and time on your hands, you can try this EMF calculator.

You’ll still need to know the type of power line and distance, but these are much easier pieces of information to get. Simply setting them into the calculator will give you a rough idea of the magnetic field, which should be enough for your purposes.

Protecting yourself from power lines 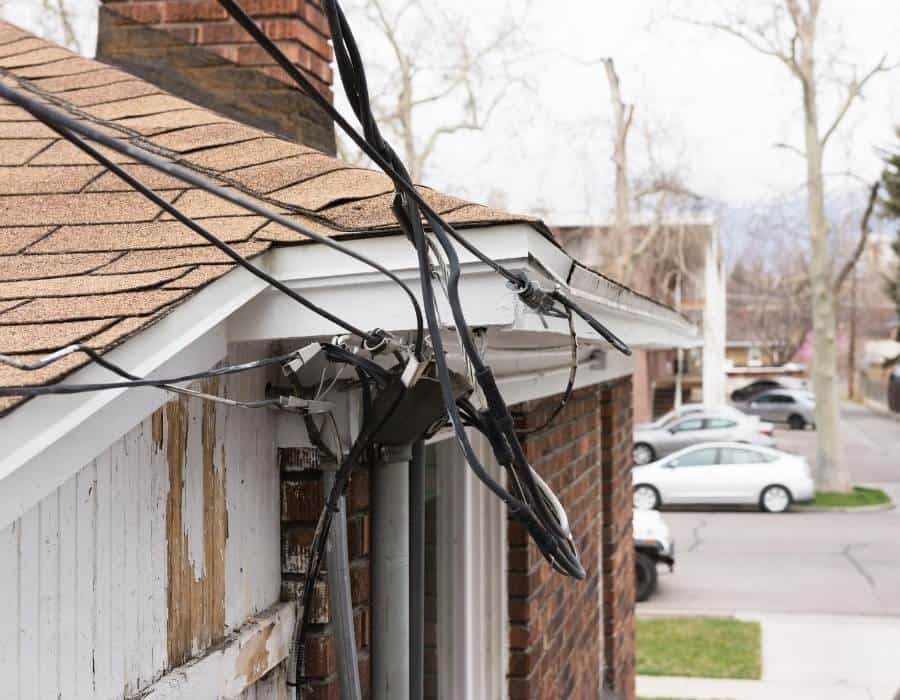 If you haven’t already, I suggest you read my article on protection from power lines which is a detailed one.

Measuring EMF radiation from power lines is fairly useful because they’re arguably one of the biggest sources of concern. If you live near some power lines and don’t have the option of moving, then it can be worth trying to block some of the EMF radiation.

However, before you start going down this route, it’s worth understanding EMF radiation intensity. It follows something called the inverse square law, which is fairly easy to calculate.

In short, this means that regardless of distance, the intensity of EMF radiation will reduce by its square. For example, when you’re double the distance, the field will be reduced by 75% (2 squared is 4).

Along with knowing about field intensity, it’s worth knowing a minimum safe distance to be from power lines. Bear in mind that this doesn’t mean long-term safe distance, but rather that you won’t want to get any closer.

Generally speaking, I wouldn’t advise getting any closer than 40ft. While this figure will depend on the type of power lines, this is the minimum safe distance from high-voltage power lines, so you should adopt it as the standard.

If you’re thinking about long-term exposure, then I personally wouldn’t want to be any closer than 500-750ft from the power lines. However, if possible I’d want to stay out of its EMF field, which could mean staying 1000ft away at all times.

You should also consider things like electric substations and transformers, which are used to convert the power from high voltage to low voltage. I’d recommend not living closer than 500ft to either of these devices.

There are obviously plenty of methods you can adopt to reduce your exposure to EMF radiation, but here are my top picks specifically related to power lines:

It should be fairly obvious by now, but keeping your distance is arguably the most sensible first step in reducing EMF exposure. Try and keep within a minimum safe distance at all times.

2. Block out the EMF you can control

While it might not seem like the most effective method of control, managing sources of EMF radiation in your home can help with this issue. More than anything, these sources will generally be much closer, meaning they’re comparatively more intense.

For example, consider buying a Wi-Fi router cage or smart meter cover. These will both help to reduce EMF radiation from these devices, which will make a difference.

You could also consider buying an EMF bed canopy, as this will help to reduce your EMF exposure while in bed. If you live particularly close to power lines, some of their EMF fields will reach inside your home, so it’s best to protect yourself.

3. Use some EMF blocking paint

If you want to block EMF radiation in a large portion of your home, consider using some EMF blocking paint. This basically functions as an undercoat for walls and is able to attenuate a noticeable amount of EMF radiation.

The paint contains metal particles that absorb EMF radiation. However, to function properly it needs to be earthed in order to draw the EMF radiation away from the walls.

This paint is fairly expensive; so only consider this if EMF radiation from power lines is a particular issue. Some of the paints have very high EMF attenuation, and so would be suitable for this purpose.

Hopefully, now that you know how to measure EMF radiation from power lines you’ll be able to effectively manage the issue. My top recommendation is to buy an EMF meter, as this is useful anyway.

However, taking the measurements is only the first step in reducing your EMF exposure. It’s important to use these measurements to keep on top of safe levels in your home.