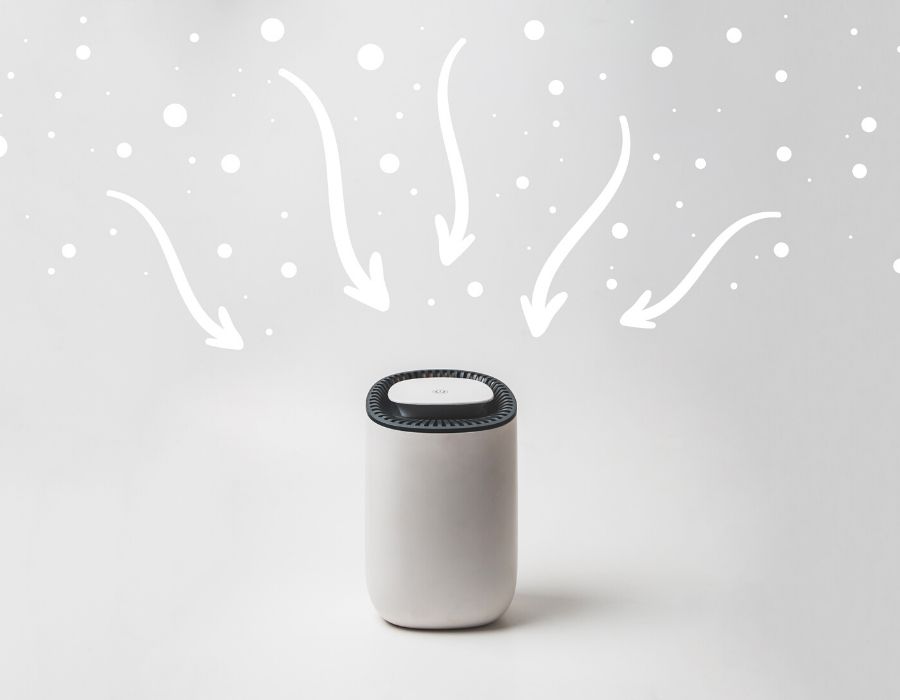 The benefits of having an air purifier in your home are almost endless. However, if like me you have concerns about unnecessary EMF radiation in your home, this can be enough to put you off buying one.

Luckily, there are 9 low radiation air purifiers worth looking at. Here are my top picks:

My top recommendation from this list is the Vremi Large Room Air Purifier (see it on Amazon) because it’s great value for money, very low on radiation, and does everything you need a good air purifier to do.

I’ll look at these in more detail below, but first, it’s worth looking at the potential EMF related health impacts of using an air purifier in your home.

Do air purifiers give off radiation?

Air purifiers, like all electronic devices, do give off some amount of EMF radiation, particularly magnetic radiation. However, unless they’re Wi-Fi enabled, they won’t give off any radio frequencies, which is what we’re generally concerned about when we discuss EMF radiation.

When we talk about EMF radiation, we’re talking about all frequencies of the electromagnetic spectrum, of which there are plenty. Generally, most people are concerned with radio frequencies (such as Wi-Fi), but people can be affected by other frequencies.

EMF radiation is produced by all electronic devices in one form or another. For example, a current flowing through a wire produces a magnetic field, as does the wire coil in something like a fan motor.

There have been several tests done on air purifiers by people concerned over their EMF levels. One such test found that air purifiers gave off between 63mG and 200mG depending on the brand. Bear in mind that anything over 12mG can be dangerous.

So why is this such a concern when it comes to air purifiers? The biggest issue is related to the fact that an air purifier will realistically be turned on for long periods of time, meaning you’re exposed to high levels of EMF radiation.

Whether you consider yourself to be sensitive to EMF radiation or not, being around such high levels of EMF radiation for long periods of time could begin to outweigh the health benefits of using an air purifier.

Therefore, the main thing you should look for is an air purifier that runs on a direct current (DC) motor. This was one of my main deciding factors for this list, so you won’t have to spend too long looking for DC air purifiers.

This air purifier is ideal if you’re looking for a compact model to work in a large space. It’s able to purify the air in a room up to 217 square feet, which should be more than enough for most.

It has a 3-stage filtration system, built-in timer and nightlight, and a smart air sensor. All of this means it’s a great model for using in personal spaces like your bedroom or a nursery.

Perhaps one of the best features of this air purifier is how long its filters last. Unlike some other models, this one only needs its filters changing every 180 days, meaning you get around 6 months run time out of it!

This air purifier doesn’t really have any negative points, as it’s efficient, a great price, and compact enough that you won’t even notice it. In fact, it’s definitely my top pick from this list.

This low EMF air purifier is a great place to start because it ticks all the boxes. Not only is it incredibly energy-efficient, costing as little as 18 cents per kWh, but it also has amazing filtration power.

The HEPA filter built into this air purifier is able to filter out 99.97% of all airborne particles, meaning it can get to things including spores, germs, pet dander, and dust.

In fact, it’s so good that it’s labeled as appropriate for nurseries and bedrooms, which should give you confidence that it’s safe to have on all day, regardless of which room you’re using it in.

The only real downside of this product is that it’s on the expensive end of the scale, but I’d say it’s worth it for the filtration benefits. What’s more, it’s really easy to carry around, meaning you don’t have to buy several for your home.

If you’re looking for a low EMF air purifier for small spaces, then this will be a good choice for you. It’s quite compact, is very quiet, and is suitable for spaces up to 57.5 square feet.

It includes a 3-stage filtration system that includes a HEPA filter and activated carbon. So not only does this air purifier remove even the smallest particles, it neutralizes any bad smells in the air too.

Better yet, this air purifier only makes 50dB of noise, which is similar to a whisper. This means that it’s suitable for using in the bedroom as it won’t make too much noise while you’re sleeping.

On top of this is the fact that it’s very low EMF. The only real negative is that it’s not suited for larger spaces, but there are plenty of other options on the market for those.

Although normal air filters are fine if you’re looking to take your air filtration to the next level then consider a smart air purifier like this one. It does everything you need it to with the added bonus of a built-in air quality sensor.

This sensor allows the machine to test air quality in real-time and adjust its fan to match. It also has an indicator that shows green, red, or yellow depending on the air quality, so you’ll always know what level you’re at.

It comes with a built-in HEPA filter that catches particles as small as 0.3 microns. It’s suitable for removing dust, pet dander, germs, and things like cigarette smoke, so it covers plenty of bases.

What’s more, it also has an anion generator and activated carbon filter so it can take on even the most overpowering odors, such as litter trays. Of course, it’s also really low EMF radiation too.

While this is a more expensive model, it comes with a 2-year warranty and spare filters, so it’s actually fairly good value for money. On top of this, it’s quite sleek and stylish too.

Not only does this air purifier emit very low levels of EMF radiation, it’s also incredibly easy to use. Unlike some others that have screens and sensors, this one is a simple on/off button and 2-speed fan control.

It has a 3-stage filtration system that includes a HEPA filter and activated carbon filter, so it combats even the smallest particles and the most stubborn odors. It’s also completely ozone free and doesn’t use UV energy at all, which might be concerns in an EMF sensitive household.

This air purifier also runs really quiet while still providing efficient air filtration. In fact, it’s so quiet that you shouldn’t have any problems using it in the bedroom.

Importantly, it comes at a more entry-level price point, so this might be a good choice if you’re not looking to spend loads of money. Of course, this means you do miss out on some features, but it still does exactly what you need it to.

While this is the most expensive air purifier on this list, it’s justified by the extra filtration it offers. It can filter up to 99.99% of airborne particles, which puts it just ahead of the others.

It uses an H13 filter, which is rated higher than a HEPA and is considered to be medical grade. However, please remember that this isn’t a medical device and is intended for personal use.

It has a sleep mode, which reduces the amount of noise it makes. This, combined with its low EMF emissions, makes it a great choice if you need an air purifier in your bedroom.

It also comes with a child lock, timer settings, and 3 fan speeds. Overall this is a great model if you’re looking at a top of the range air purifier that’s low on EMF radiation.

Winix is a leading brand in air purifiers, and this one is a follow up to their widely popular 9500 model. It comes with all the necessary features you’d expect from a model of this price, and it’s low in EMF too.

The HEPA filter is combined with a pre-filter and activated carbon filter to trap airborne particles and remove persistent odors. The pre-filter is washable, which makes the other filters last longer too.

It also has something called plasma wave technology, which breaks up odors and allergens, making it much more efficient than some other models. Importantly, this makes little to no difference to its overall EMF radiation levels.

The only real downside for this product is the price, as it’s another one on the expensive side. However, its size and efficiency make up for this high price tag and if you decide to give it a go you’ll understand.

This low EMF air purifier is one of the quietest on this list. When in quiet mode, it operates at around 35dB, which is really quiet. This makes it ideal for use in nurseries and for small children.

Although it’s fairly compact, its 3-stage filtration system is just as efficient as the larger models. Obviously the only difference is that this one will be best in small to medium rooms.

On top of this, it’s incredibly energy efficient, as it’s rated at 8W of power. This means you can run it constantly and will hardly notice the dent in your electricity bill.

The only real negative is that the device’s light can’t be turned off when in use, meaning it might be distracting if used in a bedroom. However, if this is an issue for you, then there will be another more suitable option on this list.

This air purifier has all the necessary functions and is ideal for larger rooms up to 495 square feet. To make it even better, it’s able to purify the air in a room of this size in only 10 minutes!

Its HEPA filter is able to remove 99.97% of airborne particles and it comes fitted with an air quality sensor. This is indicated by the small light on top, which means you’ll always be aware of the air quality in your room.

The sleep mode on this air purifier is perhaps one of its best features. When working in this mode it only produces 34dB of noise, which just makes it the quietest on this list. It also comes with a timer function that you can set when you go to bed.

Possibly my only negative for this air purifier is its design, as it’s not as sleek and stylish as some other models. However, this is a matter of preference, and considering its functionality, it’s definitely something I’m willing to overlook.

Finding the best low radiation air purifier might take some work, but hopefully, this list has shown you some good options. I’d recommend browsing the market to find the best one for your needs, but finding the right air purifier with low EMF radiation emissions will make a big difference in your home.