Having an apple AirPod is the ‘in thing’ right now among the present generation.

Aside from how sleek and sophisticated this technology is, it seems to be more comfortable for users when compared to the traditional headphones.

The AirPods were made available in late October 2016. They are compatible with iPhones and iPads running iOS 10 and later versions. They can also be used with the latest Apple Watch and Macs.

Since the release of the AirPods, there has been a debate about how safe it is to hold the device too close to the brain, considering the effect of EMF Radiation on the human DNA.

First thing first, let’s have a look at the definition of EMF Radiation.

Electric and Magnetic Field (EMF) is undetectable areas of energy, frequently referred to as radiation, linked with the use of electrical power and other forms of natural and human-made lighting.

The increase in the sale of this wireless headphones calls for serious concern considering how close-ranged the device is to the brain.

The intensity of the radiation equals that emitting from a microwave device which is similar to Bluetooth radiation, that can cause brain damage.

The Bluetooth device uses radio waves in the 2.4–2.48 GHz frequency range to transmit signals wirelessly between devices. That’s the same range used by microwaves, cell phones, WIFI and other devices.

The Apple AirPod is one of the most connected devices you can put in your ear, as it connects via Bluetooth, WiFi, and cellular.

One of the dangers associated with earbuds tech like the Apple AirPods is that it is continuously close to the brain (if always in use) and in direct contact with your skin.

As we know, research made relating to this subject shows that closeness to the source of EMF radiation is tremendously vital. By wearing the Apple AirPods, we open ourselves to the maximum amount of radiation this device emits.

Joel Moskowitz who is a director at the UC Berekely School of Public Health, says he is concerned about the use of the AirPods considering it’s proximity to the brain.

‘’We can’t say with certainty that these devices are dangerous but judging by the research carried out on similar radiation type, there’s a good reason to think this is going to be problematic in the long term.” – Joel Moskowitz

The argument has some weightage because it is well known that airpods emit the same kind of radiation emitted by other devices.

And there is sufficient evidence, though debatable, that EMF radiation causes long term harm.

“It’s like we keep remembering that Bluetooth is destructive and trying to forget it because we don’t know how to handle it from a policy viewpoint.  Although, we don’t understand the long-term risks of using Bluetooth devices, why would anyone insert microwave-emitting devices in their ears near their brain when there are more harmless ways to use a cell phone?“- Joel Moskowitz

Over a dozen studies have proven that low-intensity radiation can open the blood-brain barrier which can lead to conditions like dementia, brain cancer, and autism.

“What troubles me the most about AirPods is it’s taking cell phones one step deeper into the head. It’s a serious amount of power being delivered even closer to the brain. It just doesn’t make sense.” – Jerry Phillips

It seems like not all scientists agree with these statements.

John Moulder who taught oncology at the Medical College of Wisconsin believes that the health risk associated with AirPods usage is improbable considering that the Bluetooth transmitter is hanging down from the ear.

Kenneth Foster a bioengineer professor at the University of Pennsylvania also shares the same view with John Moulder saying, radio frequency radiation has not been proven to cause a blood-brain barrier.

“Apple products are constantly designed and verified to meet or surpass all safety requirements.” – Alex Kirschner

He also confirmed that AirPods will always transmit signals while they are in your ears just like other Bluetooth headsets. 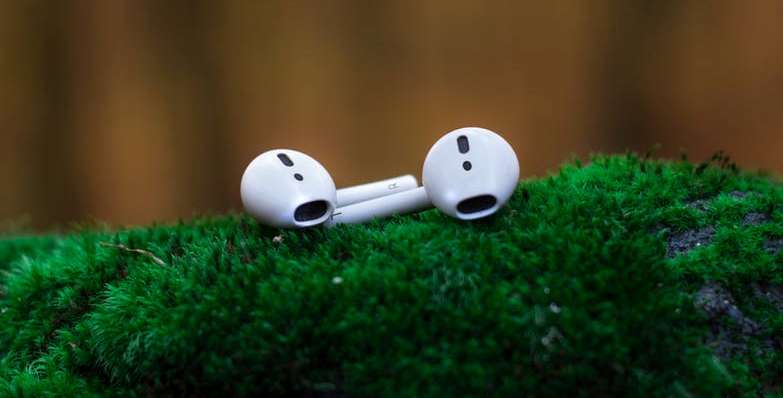 Below is a list of the potential biological changes caused by electromagnetic radiation, as observed and reported in several studies;

Damage to the Brain Cell

Research done on the effects of cell phone frequencies (applied at non-thermal intensity) on the brains of rats, showed impairment to the neurons (brain cells) in several brain parts, as well as the cortex, hippocampus, and basal ganglia.

Change in The Skin Protein Level

A group of women offered to partake in a study in which radiation (900mH) from GSM cell phones was applied to them for an hour to imitate a phone call. After this, scientists screened their skin cells for any abnormal reactions. They analyzed 580 different proteins and found out two were substantially affected. (There was an increase in one by 89%, and the other decreased by 32%).

Damage to Our DNA

A German research group Verum researched the outcome of radiation on human and animal cells. After contact with cell phone frequencies, the cells showed amplified breaks in their DNA. These cells could not always repair the DNA breaks, thereby, causing the damage to be passed on to future cells which could influence them to become cancerous.

One of the scientists at the National Research Council in Bologna, Italy discovered that Leukemia cells, when bared to cell phone frequencies (900mH) for 48 hours, replicated more violently.

Activity Level in The Brain Cells

Researchers from Fatebenefratelli Hospital in Isola Tiberina discovered that the electromagnetic field produced by cell phones could cause excitement for about an hour in some cells within the brain’s cortex (adjacent to the side of phone use) while other cells become inhibited.

Researchers in Germany discovered that one-time use of a cell phone for 35 minutes might result in a rise in resting blood pressure of between 5 and 10mm Hg.

EMF radiation from AirPods to a Physicist would appear to be of low-frequency, and radio-frequency radiation would be harmless to humans, unless, the heat is so intense that it damages our tissues and molecules in some way. It sounds rational, and some scientists still take this position on EMF.

A biologist, on the other hand, has a different view. To a biologist, whatever makes the human cell react to low levels of EMF by changing their behavior deserves to be looked into and not brushed off.

The biologist takes it a step further by looking at the significances caused to the organism of this changed cellular behavior to see if the effects are neutral, valuable or harmful.

Allow me to point out that not all the effects of EMF may yet be known, but here are some that are;

All the effects mentioned above are all measurable and might occur at various degree of intensity that might be too small to cause a noticeable heating effect at once. Judging from this, biologists are pretty clear that the impact of EMF cannot be good for the human body over time.

The sad thing about most of the damages (disease) caused by EMF is that it will likely only appear after many years of exposure making it quite hard to pin the proof on EMFs.

So maybe you might be thinking like I am right now, analyzing all the gadgets and electronic appliances you can do without in your life.

The truth is in this present world, we breathe and sleep technology. We might not be able to completely take out EMFs from our lives, (if we want to enjoy a somewhat decent life) but we can reduce how exposure affects our lives.

Here are things you can do to reduce EMF in your home space:

We spend almost one-third of our lives in bed; this means we spend a lot of time in our rooms. Keep your room gadget free as much as you can, leave only necessary things and when these things are not in use, learn to turn them off.

Yes, it’s called a laptop, and you are expected to use it on your lap. My advice, at no point, should you put it on your lap. Whether or not it’s connected to a power adaptor, it produces harmful EMFs.

Read my related article on laptop radiation which explains why, in detail.

Position your bed far away from every power outlet; this includes the AC magnetic field, electrical wall wirings, and all electronic gadgets. You do not want radiation getting into your body during your beauty sleep.

Read my article on sleeping next to electrical panels and outlets.

The Longer your AirPods stay in your ears for, the longer your risk of exposure. Your AirPods produces radiation directly to your ear which can directly affect the brain.

Now, for us to reduce the harm this sleek technology can do to us, let’s consider these options;

In conclusion, If you’re concerned about exposure from your wireless AirPods or internet connection, you could use a wired connection when possible, keeping your router away from rooms where you spend the most time, and keeping it turned off at night.

Thanks for reading. Before you go, check out my recommended products for EMF radiation protection.

Welcome to EMF Advice, my blog. Over the past two years, I have put in a lot of time and effort into researching the unseen harmful force known as EMF radiation. I have a wife and two kids and protecting them was the driving force behind my hard work. Through EMF Advice, I want to share with the world what I have learned. I hope you find the information useful.