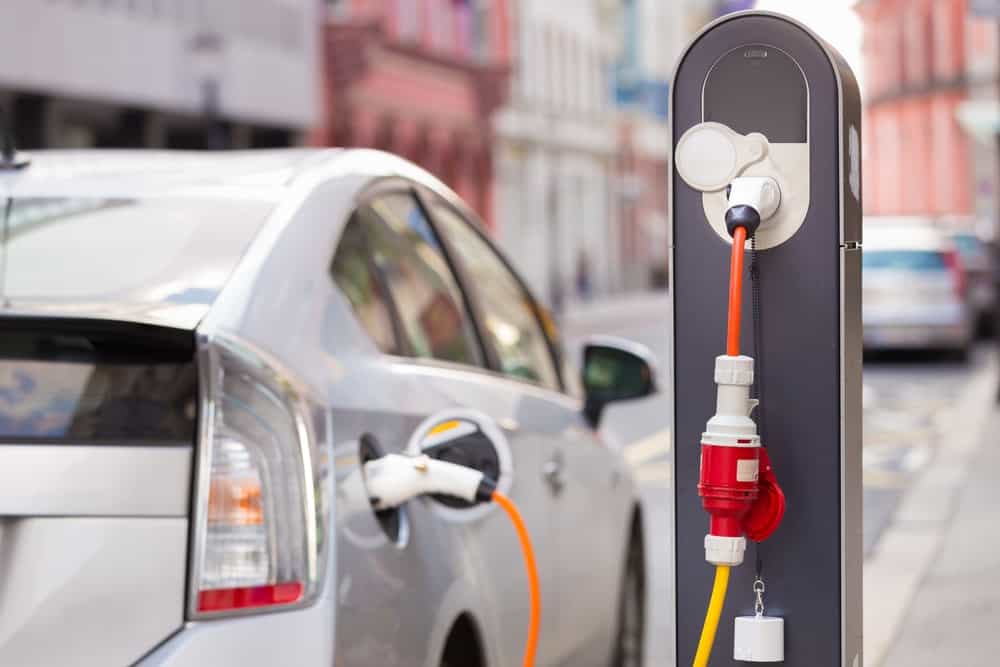 It’s hardly a surprise that electric and hybrid cars give off more EMF radiation than standard petrol vehicles. Is this a problem? And what can drivers looking for a more eco-friendly car actually do about it? These are things I look into in this article.

The biggest cause for concern in an electric or hybrid vehicle is the large battery (or batteries) that power the car. These are commonly found in the rear of the vehicle, but some have batteries in the front as well. Obviously these batteries need to hold quite a lot of charge to power a vehicle.

One reason the batteries are so problematic is because they use alternating current (like mains electricity) rather than direct current (like most normal batteries). Aside from anything else, this can result in spikes and surges associated with dirty electricity, which are a big concern for those sensitive to EMF radiation.

Then, of course, there are all the electrical gadgets found in these cars. While almost all cars contain some kind of onboard computer nowadays, electric and hybrid cars often contain very complex systems with a wide range of gadgets fitted. For every gadget you get more EMF radiation in the car.

The reason it’s so problematic in vehicles is that the radiation is being produced inside the vehicle, and so the radiation remains trapped inside the car. This wouldn’t be too bad if you were on the outside, but considering you’ll be sat in the car, it’ll be like being in a very, very weak microwave.

So, the bottom line is that electric and hybrid cars produce much greater amounts of EMF radiation than standard petrol vehicles. Therefore, finding the right balance between saving the planet and remaining in good health can be challenging. Luckily, there are things you can look out for.

The main sources of EMF radiation in electric and hybrid cars

This doesn’t require much explanation, as computers are a major source of EMF radiation in the home too. The onboard computer is necessary for controlling almost everything in the car.

As I mentioned, these run on AC electricity, so think of them as a mains power system, like your home. What’s more, the batteries will emit a spike of radiation when switching currents, which happens when the car is started.

All vehicles have one, but in electric cars its job is to convert the stored electricity into something usable for the engine. As a result, alternators emit plenty of EMF radiation when in use.

Relay switches produce fields of magnetic radiation when in use, such as when you press the brake or use the indicator. While they’re not constantly in use, they produce spikes of radiation every time they’re used.

Obviously the car runs on one big electric motor, but it has plenty of smaller ones for things like mirrors and windows. These also emit radiation when in use, but much less than the main motor.

Although none of us knew we needed WiFi in our cars, it’s now here! Those in the know about EMF radiation will already be aware of the dangers of WiFi, and now you can experience them in your car too!

Keyless vehicles use fobs and radio waves to complete circuits, rather than a traditional key. Some also use Bluetooth along with radio waves, which simply mean more EMF radiation in your vehicle.

Alarm systems also rely on radio frequencies, which can emit large amounts of EMF radiation, even when the alarm is going off.

The key thing here is that many of these devices don’t emit large amounts of EMF radiation. After all, when you think of their size when compared to something like a cell phone mast, you’d think there was little to worry about.

However, the danger here is in the combined radiation from all these devices at once, directed at you on a reasonably consistent basis. If you drive your car for 2 hours a day just for your work commute, that’s a minimum of 10-14 hours of exposure a week.

Again, this might not sound like much, but once you start adding everything up, it begins to look much worse. Add this to the fact that you’re sat in a Faraday cage with all this radiation bouncing around inside, and you might begin to see the problem.

The symptoms of EMF radiation exposure are quite wide-ranging, and can be different in different people. What’s more, they’re often misdiagnosed as symptoms of other problems, or just put down to general life.

This is why many people don’t even know they’re sensitive to EMF radiation. However, those that have come to this conclusion often point to situations like being stuck in heavy traffic as a major trigger for their condition.

Some of the general symptoms of EMF radiation exposure include:

A recent study conducted on the effects of EMF exposure found that drivers with more electronic components in their cars (and therefore more EMF radiation) fell asleep nearly an hour quicker than those in older cars.

Don’t get me wrong; drowsiness behind the wheel is a common problem for all drivers, particularly if you’re taking a long trip. But increasing your chances of falling asleep behind the wheel by this much is really something drivers should take notice of.

For this reason alone, and of course all the other dangers of EMF exposure, it definitely pays to do a bit of research before investing in a new car. If you’re already aware of your sensitivity to EMF radiation, then the best advice I can give is to avoid electric and hybrid cars for as long as possible.

Ways to reduce EMF exposure in your vehicle

When it comes to reducing EMF radiation in your vehicle, it’s a much harder problem to solve than in the home. For example, you can’t simply avoid using certain equipment or limiting the time you spend in the car. If this is what you’re thinking, just get rid of the vehicle altogether.

Similarly, normal radiation blocking solutions won’t work because the radiation is contained in the vehicle. Aside from building another, smaller Faraday cage inside your car, there’s little you can do to prevent exposure to all that radiation.

Instead, you have to be a bit more intelligent about the type of vehicle you buy, and the ways in which you use the vehicle. Here are my top tips for avoiding excess EMF radiation exposure. Just remember though, you’ll never completely remove the problem. 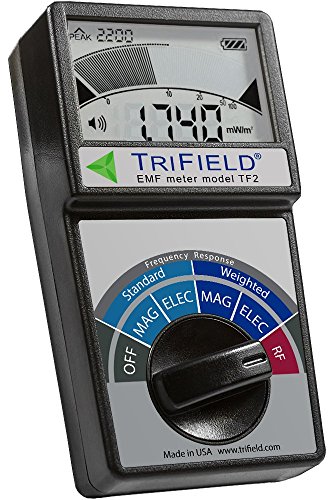 This should be your first step if you don’t already own one. A radiation meter will give you readings of how much EMF radiation is being produced by the car, and you can use this to identify problem areas, or even to help you pick the right vehicle.

The one I highly recommend is the Trifield TF2 (check price on Amazon). Also, read my hands on review.

If you already own the car, use the meter to work out which systems produce the most radiation. Get a base reading for the vehicle while it’s on with all systems running. Note measurements for how much radiation is being directed at you in the driver’s seat. For example, note how much is being absorbed by your head, chest, and groin.

Now go round and turn various systems off within the car. Obviously you won’t be able to do this with everything, and make sure you don’t compromise passenger safety. Hopefully by doing this you should be able to identify some of the worst offenders that you actually have control over.

2. Be clever about what you buy

If you’re thinking of getting a new car but were wondering about EMF radiation levels, the best first step is to choose a vehicle with the fewest electronic components available.

As I mentioned, almost all vehicles have an onboard computer, so this isn’t something you can really avoid. Also, make sure you keep safety features like airbags and brake controls, as these really aren’t worth sacrificing.

If it’s not obvious what each vehicle contains, speak to the dealer, or do your own research online. The most obvious thing to note is that older vehicles will have less technology in them, so this is usually a good place to start.

This is much like the point above, but if you can’t avoid getting a modern car, then simply choose one without all the added extras. Generally speaking, base models of vehicles often won’t have all these features, so you’ll be both saving money and your health.

The main offenders (and the things easiest to avoid) include LCD display screens, built in satnav, keyless start, and onboard WiFi. These are all the things that emit high levels of EMF radiation, so look for models without this kind of tech. The same is true for Bluetooth compatibility within the car.

Speakers, particularly subwoofers, are another big source of EMF radiation that not many people give any thought to. However, the technology inside speakers is quite complex, and relies on different currents and magnetic fields. Therefore it makes sense to avoid this almost unnecessary level of technology in a car.

If possible, start by avoiding cars with complex speaker systems. Normal door speakers should be all you need, and I don’t think you need bass-heavy subwoofers in a car anyway. After all, it’s a pretty small space to fill with sound.

Another useful tip is to adjust your sound system so that the rear speakers do all the work, meaning you essentially shut the front speakers off. This gives you the best of both worlds because you can still listen to music, but have put a greater distance between yourself and the source of radiation.

While I can’t say I’m surprised to know that electric and hybrid cars emit more EMF radiation than petrol vehicles, it is a worrying fact to know. After all, their popularity is only going to increase.

If you find you’re sensitive to EMF radiation, just be careful about what kind of car you buy. If nothing else, just avoid a gadget-heavy vehicle, which should save you money too.