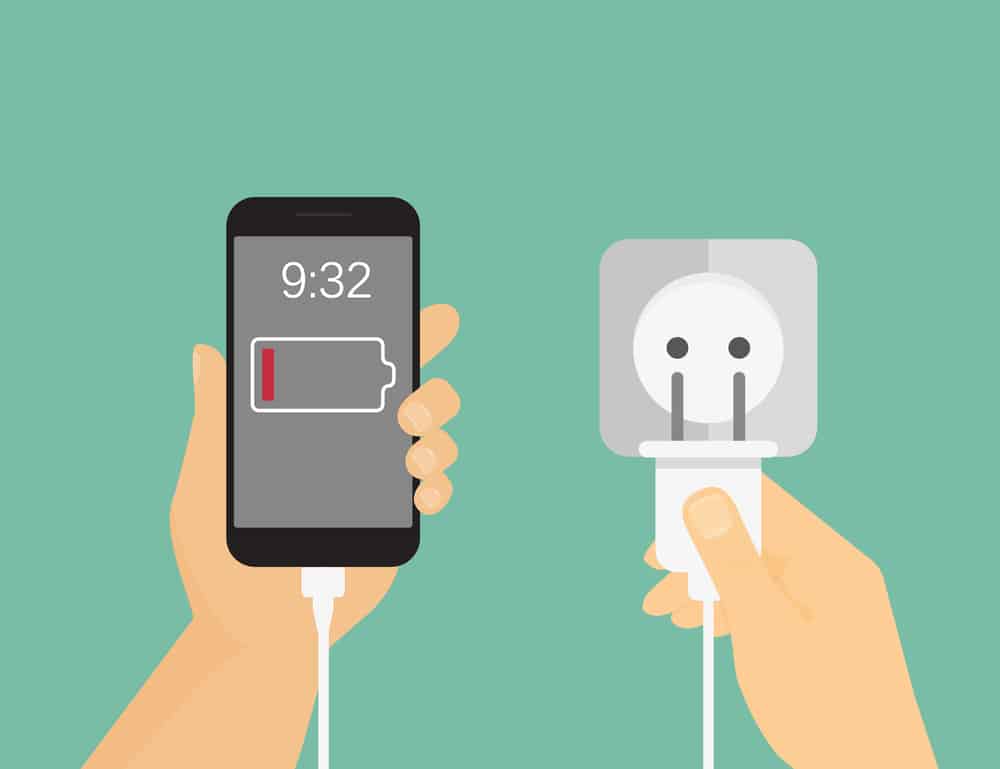 When you hear the word ‘radiation,’ does it start your mind fabricating scenes from a stomach-turning sci-fi movie? The possibility of even being exposed to radiation, on any level, is scary. But let’s take a look at what radiation is and how it impacts your life as it pertains to cell phone use and charging.

Is My Cell Phone A Source of Radiation As it Charges?

The process by which the battery on anything is charging does not promote or emit radiation. The charge program feature of your phone is designed to keep the battery at peak operating performance, and the constant cycles of DC current are meant to be a conditioning feature to further battery life.

The waveform from the charger will emit an incredibly tiny amount of low-frequency RF form of energy that can be considered to be an increase in the number of emissions as compared to when the phone is not charging.

But consider this, the amount of radiation emitted from your phone in either the “on” or “charge” phase is negligible compared to the UV radiation from walking out into the sunshine.

While the purpose of this article is to analyze the specific question as it pertains to the phone while being charged, many wonder if their cell phone typically emits radiation, whether charging or not?

Every cell phone emits various amounts of electromagnetic radiation. When considering that there is an approximate location close to the brain while using your cell phone to access cell towers in a phone conversation, it could be possible that harm could come from using the phone. There are more than 118 million cell phone users in the United States.

Also read: Do Cell Phones Emit EMF When Not in Use?

What Are The Specific Dangers From Cell Phone Radiation?

While mobile phones are considered to be a significant source of radiation that is emitted, what if anything could be considered dangerous?

It would seem that the common sense approach would be to stay off of the phone. But the fact of the matter is that these devices have made our lives better for the most part regardless of time spent or damage done.

What About Other Charging Devices?

Since the world apparently runs on wireless technology, doesn’t it stand to reason that some of our other devices could be possible sources of radiation emissions while charging? In a word, yes, but let’s take a deeper look at some of those chargers of other devices.

Since a charger for a laptop tends to run a bit larger than the standard wall-wart for your phone, it is better shielded against radiation emissions. But this does not prevent the fact that all charging devices shed some radiation when there is a power source applied to the charger.

Is this amount harmful to the human body? Maybe, maybe not. There is a very high frequency “chopper” present in all modern charging devices. This is why you may sometimes hear a very high pitched whine coming from a charger. The best bet it makes a designated charging station that is located away from where you sleep as you could be exposed for longer periods of time during sleep cycles.

There are some experimental chargers available that do not use a power cord. They emit radio waves, making them an even bigger culprit of radiation emissions. But this technology is very, very inefficient, making it not only a fire hazard but a source of radiation.

Do these chargers emit radiation, yes they do? But they are not harmful amounts. The amplitude of the radiation coming from these devices will not hurt you. So there should be very little concern as to whether or not this is causing harm.

But The Argument Goes Both Ways

The rule of thumb has usually been that it takes a very high level of radiation to harm your body. But some of the more recent findings lean toward the effects of prolonged small amounts of radiation.

The degree to which they are exposed is dependent upon several factors. Such as how long the person stays on the phone, what type of phone it is, and how far the user is from the cell phone signal, and it’s the tower that it’s connected to.

As with anything, there are always different situations that can produce different results.

Some wearable technology such as the Apple Watch can be considered a source of EMF radiation. These types of devices are considered by industry experts to be worse than cell phones because of the constant direct contact with the skin.

Your average watch with a battery emits a very, very low-level EMF but is nothing compared to devices that continuously transmit and receive data. The best way to avoid the EMF radiation from these devices is not to wear them at all.

New York Times columnist Nick Biltin wrote in a March 2015 article that the low level of radiation from these devices could trigger the growth of tumors, blood abnormalities, and more. But still, for many of us, the convenience outweighs the risk. .

So What Does All of This Mean?

Frankly, it is a misconceived perception that cell phones emit radiation. They do, but the amount is far less than industry experts would have you believe. When you mention the word “radiate”, it automatically imposes a sense of fear and uneasiness. Tests have done over and over and over, and the results tend to be the same. Cell phones and other wireless devices emit radiation. Plain and simple.

There has been a multitude of tests, and with those tests are a multitude of the result. To show you precisely what I mean, let’s consider the following experiment that took place concerning cell phone radiation emissions.

In one case study, there were 100 cell phones strapped to 100 pigs. These tests were to monitor the amount of EMF radiation that the pig could endure. These pigs were followed for 30 days, and then the end result was published. The pigs with cell phones got better jobs.