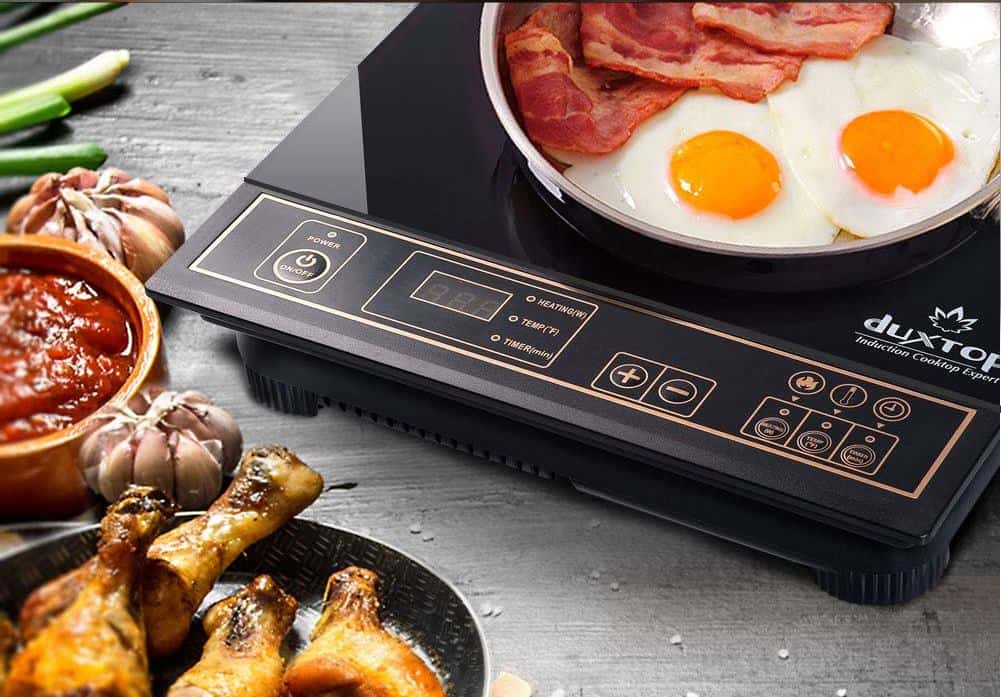 Induction cooktops are becoming increasingly popular as an alternative to traditional electric cookers. However, it’s worth considering whether they emit EMF radiation, and if so, whether it’s safe. I decided to do a bit more research on the issue.

With this in mind, I decided to look into how induction cooktops work a bit more detail, along with how you can work around this issue if you’ve got an induction cooktop in your home. If you’ve been thinking of upgrading your cooker, read this article before making a decision.

Induction cooktops have become very popular because they’re incredibly fast and efficient when it comes to cooking food. What’s more they save loads of energy compared to a traditional electric stove (RELATED ARTICLE) and can come with a range of modern features.

In short, induction cooktops are large electromagnets. Under the class cooker top are coils of copper wire that become magnetic when a current is passed through them. Heat is actually a by-product of this process, but is obviously a very useful one in this situation.

When you put a pan onto the induction ring, it becomes part of the electromagnetic circuit. This is why manufacturers recommend you only use steel or steel alloy pans, as they’re the most conductive types when using an induction cooker.

The electromagnetic circuit causes the pan to get hot very quickly. This, in turn, means your food heats up very quickly, which is obviously very convenient. However, it’s also worth considering the potential health impacts of using an induction cooktop.

One of the biggest causes for concern when using an induction cooker is the fact that, when you touch the pan, your body also becomes part of the circuit. While only a small amount of EMF radiation is passed into your body through this process, it’s more than is probably acceptable.

Electric devices that contain heating elements have very high power demands, as heating metal in this way isn’t a very efficient process. As a result, some appliances produce large amounts of EMF radiation by powering their heating element. As you can imagine, an induction cooktop is no exception to this.

Read my articles on some other heating devices:

However, as with many electronic devices, induction cooktops haven’t been around long enough for us to really know the long-term health impacts. But, if like me, you’re aware of the potential dangers of EMF radiation, it’s best to be cautious when bringing these kinds of appliances into your home.

How does EMF radiation from induction cooktops work?

Some examples of devices that emit high levels of radio frequencies include things like cell phones, WiFi routers, and smart meters. Radio frequencies are the part of EMF radiation that most people are aware of, but this isn’t really a cause for concern when we talk about induction cooktops.

The first cause for concern is electric fields. These are created by differences in voltage in a device, so the higher the voltage, the stronger the electric field will be. An electric field exists even when the appliance isn’t in use, and remains constant the whole time.

The other cause for concern is magnetic fields. These are created when an electric current flows through the device, and in induction cookers, are the main way of actually heating the pan.

As you can imagine, in an appliance like an induction cooktop, power consumption is quite high, which means so is the magnetic current. This is made even more potentially worrying by the fact that your body becomes part of the magnetic field every time you touch the pan.

Are induction cooktops safe to be around?

When it comes to the actual safety of induction cooktops, I feel this is something that’s still a bit up in the air. After all, few conclusive studies have been done on the long-term impacts of EMF radiation, let alone the issues related to something like a cooker. Most people focus on devices like cell phones and smart meters.

However, it’s also worth considering that most people won’t be in close proximity to an induction cooktop for all that long. Even if you’re cooking something complicated, the amount of time you’ll be standing in front of the cooker for isn’t likely to be more than a few hours.

When you compare this to other devices, such as cell phones, which we might have in our possession for 24 hours a day, induction cooktops suddenly don’t seem all that dangerous. Add to this the fact that you’re not dealing with the most potentially dangerous form of EMF radiation (radio frequencies).

That said, it’s worth having a level of caution around induction cookers, as they’re quite new technology. If you’re only using it for an hour or two, then don’t be too concerned. However, if you’re a chef, then maybe consider making some changes to your cooking practice.

How to deal with EMF radiation from induction cooktops

If you’ve already got an induction cooktop in your home, and are now concerned about EMF radiation levels, don’t worry. There are plenty of things you can do to work around this. Similarly, if you’re thinking of buying an induction cooker, then consider these tips before you do.

Buying the right pans to use with your induction cooker can be difficult to begin with, as manufacturers can be very specific about which types to use. Add to this the idea of choosing the right handles, and you might have about 3 options to choose from.

However, getting the right handles for your metal pans is very important. Most, weirdly, come with metal handles. A metal handle is great at conducting both heat and electricity, so why not do something about this to make your life easier?

If you can find a set of pans with insulated handles, then you’ve probably already solved the problem. Most materials that insulate against heat will have some level of electric insulation too, but keep an eye out for this as a feature.

Alternatively, if you don’t want to bother buying a new set of pans, look out for some handle insulators. These are inexpensive, and will be available in most cooking stores, or online.

The best material by far is silicone. Silicone is an excellent heat insulator, so is widely popular for this kind of application. Also, it can be manufactured as either an electrical conductor or insulator, and is great at both.

For pan handle insulators, the silicone is most likely going to be electrically insulating too. This makes them a safe and practical option for breaking the barrier between the electric circuit and your body, which removes most of the concern from using induction cooktops.

It should be pretty obvious, but in this situation, a simple cloth or oven mitt won’t get the job done. You need a material that insulates against electrical current, and cloth doesn’t do this. Sure, use a silicone oven mitt, but that’s about it really.

As I mentioned earlier, one of the things I’m not comfortable with is the fact that your body becomes part of the magnetic circuit every time you come into contact with the metal pan. While this is something I’ll discuss in more detail shortly, it’s also worth looking at other issues.

The biggest one, aside from the pan, is the type of utensil you use. It’s not uncommon for people to use metal utensils to stir their food, but this should generally be avoided anyway (metal utensils can ruin non-stick coatings, even on expensive pans).

Generally speaking, metals are conductive. Considering most utensils will likely be made from stainless steel, as it’s a practical metal, this is also the same material used for the pans. Remember how I said you need to use these pans because the metal is very conductive?

Well, the same is true for the utensils. This means that every time you stir your food on an induction cooktop, you’re joining the circuit, even if you don’t touch the pan directly. Luckily, this is a pretty easy one to solve.

The most obvious choice is to simply use plastic or wooden utensils, as these won’t conduct any electricity. Failing that, use metal utensils with a plastic or silicone handle, as this also does the same job. Not only will this break the magnetic circuit, it’ll reduce the chances of burns if you leave the spoon in the pan.

3. Choose a different type of cooker

If you haven’t yet bought an induction cooker, but have been thinking about it, then consider all your options before going ahead with a purchase. Induction cooktops might be popular, but that doesn’t mean they’re ideal for your needs.

In my opinion, and in the opinions of all chefs I know, you really can’t beat a gas cooker. They heat up incredibly fast, give you much better direct heat, and you’re not limited by what kind of pans you can use. Plus, because the technology is much simpler, they’re often cheaper to buy.

However, making the choice between a traditional electric cooker and an induction cooker is a difficult one. After all, they both use electricity, which brings back the element of EMF radiation. So, which one is better?

In terms of energy efficiency and cooking speed, induction cooktops do unfortunately win. They represent the latest development in cooking technology, and can be considered the cell phone to the traditional electric cooker’s house phone.

Electric cookers either work using heating coils or ceramic glass cooktops. Both work on the same principle of passing electricity through the coil to heat it, but unlike induction cooktops, they don’t do this by creating a magnetic field.

This means you can use any pans you want, but also that the process isn’t as efficient as an induction cooker. If you choose to buy an electric cooker, go for a ceramic glass cooktop, as they’re a good compromise.

Weighing up the pros and cons of electric and induction cooktops isn’t really worth it in this situation. After all, they both produce EMF radiation, which is our cause for concern here, so it’s not worth digging too much deeper.

If you want to buy a new cooker and have concerns about induction cooktops, then stick with gas. You can’t really go wrong with it. In fact, the best combination is a gas cooktop and an electric oven, as you don’t need to stand at the oven when it’s not in use.

Working around the fact that induction cooktops emit EMF radiation isn’t that difficult. By breaking the barrier between the pan and yourself, you remove much of the danger. That said, I recommend just sticking with gas, as this removes the problem entirely!