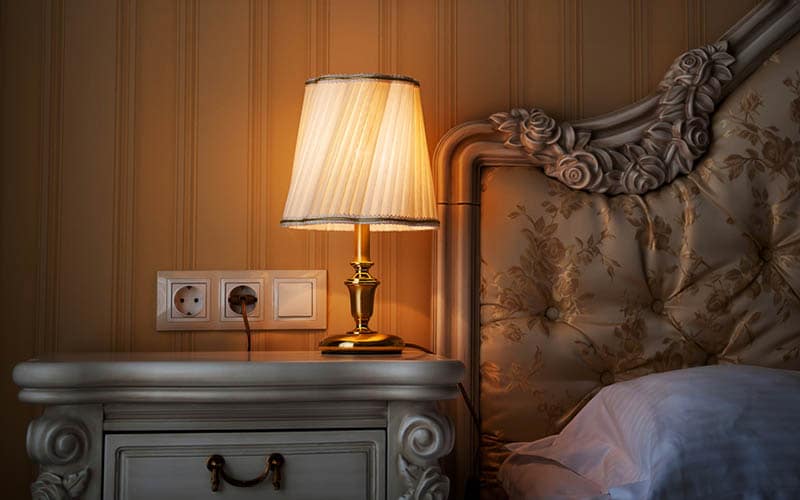 Will you be safe from EMF radiations while sleeping near electrical outlets and panels? What if there is nothing plugged in, will you still be affected?

Here is the short answer.

Do note that I used the word ‘negligible’ for electrical outlets. There will be some amount of EMF radiation coming out of the outlet owing to ‘dirty electricity’ even if there is nothing plugged in.

In any home, dirty electricity will always be present, and it is virtually impractical to eliminate it.

What is dirty electricity?

Simply put, it is the disturbances in the electrical system of a house which are caused by appliances, electronics, energy saving devices, etc.

Appliances or devices in a home ranging from computers, cell phone chargers, televisions, dimmers, microwave ovens and everything else which runs on power are a source of dirty electricity.

Electricity itself is a source of Extremely Low Frequency (ELF) radiation. In this article, Cancer.org has brought out that generation, transmission, and distribution of electricity exposes us to ELF radiation which is harmful.

The article goes on to explicitly state that household wiring is one of the sources of this type of radiation. With dirty electricity, the effect is even more severe.

All appliances and devices convert the standard AC in the home to DC or a different voltage configuration to function. While doing so, they create spikes and bursts which form unwanted electromagnetic radiation.

Read this article to know more about dirty electricity and ways to reduce the harmful effects of electromagnetic radiation caused by it in your home.

What are the risks of ELF?

The WHO website has explained in detail what studies have revealed on health risks which include childhood leukemia and cancer.

There are conflicting views to these studies, but there are many other studies, apart from those conducted by WHO, which have similar findings.

How Does Dirty Electricity Affect A Person Who Sleeps Near An Electrical Outlet?

Let’s assume no electrical appliances are running in the room in which you sleep. Your TV is disconnected, and there is not a single cell phone charging in the room. Will that electrical outlet be a source of EMF radiation?

The answer is yes. There will still be some amount of EMF radiation which will be coming from the outlet because that outlet is connected to the household wiring.

There are other appliances and devices which are running in other parts of the house like a Wi-Fi router or a light being operated by a dimmer switch. And dirty electricity will be transferred to the outlet in your room.

But these EMF radiations are likely to be of a small magnitude, and that is why sleeping near an electrical outlet which has no power devices connected to it is reasonably safe.

Many houses have electrical panels or fuse boxes located inside a garage or a basement, but there are some that have them installed inside the house. The latter is dangerous for obvious reasons, and you will have to do what is necessary to protect yourself and your family from the harmful EMF radiations.

When it comes to protection against EMF radiation, there are three things that we need to consider

Distance From The Source

Distance from the source is the most important of the three. The further you are from the EMF source like an electrical panel, the less you are affected by it.

Hence, if you double the distance from the EMF source, the intensity of the radiations will be reduced by one-fourth.

There is another rule of thumb which will give you an idea of how much effect the distance will have on the intensity of EMF radiations. If you are one foot away from the source, the impact will be one fourth the amount that you feel when you were touching it. In case you are two feet away then the effect would be one-sixteenth.

This clearly proves that distance has the most significant effect and will be your ally that will help you in protecting yourself from harmful EMF radiation. Even a small increase of distance from the source will be highly beneficial.

If you have an electric panel or fuse box just outside your room, the best thing is to relocate your bed as far as possible from the electric panel.

As far as exposure times are concerned, lesser the time that you are near any source which produces EMF radiation, the better.

When sleeping in a room which has an electrical panel or fuse box nearby, there is of course very little you can do to control the exposure times while sleeping. Hence, this factor is more or less irrelevant here.

Shielding devices are becoming more and more popular by the day, and these are highly recommended in modern times where we are exposed to high levels of EMF radiation.

There is an option of using Mylar thermal blankets which will act as a protective barrier or shield and can be stuck on walls. Mylar blankets are cheap and effective but serve as a temporary solution and will ruin the aesthetics.

EMF shielding paint, on the contrary, is a permanent solution which will also look good.

Sleeping Near an Electrical Outlet – A Summary of Effects and Precautions

To summarize the adverse effects and tips for protection while sleeping near an electrical outlet are as follows:-

Sleeping Near an Electrical Panel- Effects and Tips

To summarize the adverse effects and tips for protection while sleeping near an electrical panel are as follows:-

Protection from EMF radiations needs to be taken seriously.

Over the past two decades, the use of cell phones, microwaves, smart watches, smart meters, and wifi has increased exponentially. The harmful effects of EMF radiations are being realized slowly.

The dangers of radiations from power lines is also not to be taken lightly. Electricity is known to produce strong radiations, and dirty electricity is even worse.

With the addition of electrical devices, this dirty electricity being generated is of higher intensity as compared to the past.