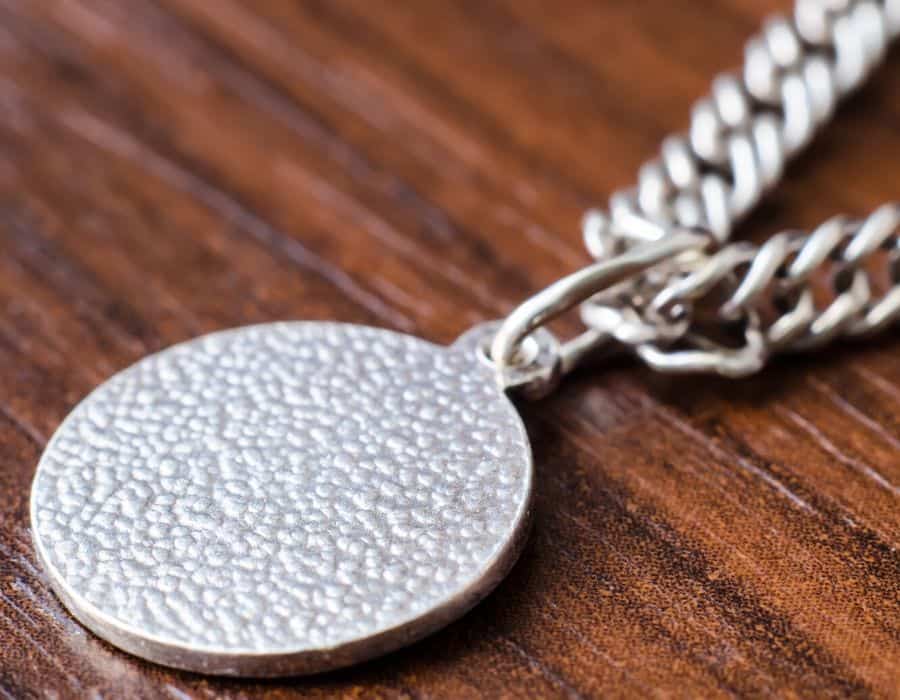 Many people are now waking up to the dangers of Electromagnetic Frequency (EMF) radiation and are looking for ways to protect themselves from it. One such option is EMF pendants, but I regularly get people asking me, “Do EMF pendants really work?” Well here’s a quick answer:

EMF pendants claim to work through attenuation, and while this is a real thing, it’s impossible to attenuate large amounts of radiation through such a small pendant. The bottom line is that EMF pendants don’t really work when it comes to protecting you from radiation and so are a waste of money.

Read my article in which I list and explain which EMF products work and which don’t.

Here, I’ll look into more detail about the “science” behind EMF pendants to demonstrate why they don’t work. Then I’ll show you some practical ways to protect yourself from EMF radiation.

How do EMF pendants claim to work?

EMF pendants like the ones often marketed on EMF websites can be made from a number of different materials, but they’re often made from rocks or minerals that demonstrate some kind of conductive power, such as shungite.

Manufacturers claim that these small pieces of mineral, worn around your neck or attached to your cellphone, will be able to block harmful EMF radiation by creating an energy field around you.

Read my article on Shungite.

The pendants apparently do this through a process of attenuation, which is a real and observable thing. Attenuation is designed as the loss of force as a result of passing through an object. For example, think of how sounds become muffled when heard through a wall; this is attenuation.

So in theory, there’s no reason why EMF pendants can’t work on a process of attenuation. After all, many minerals demonstrate conductive or shielding properties; such as lead being used to block X-ray radiation.

Similarly, minerals such as shungite are able to block EMF radiation, as this video clearly demonstrates. In theory, then, there’s no reason why EMF pendants wouldn’t work, right?

In short, EMF pendants work in one of 2 ways: either they use a mineral that blocks EMF radiation, such as shungite, or they use different materials to neutralize or convert the EMF radiation into something less harmful to the human body.

If these claims sound too good to be true, it’s because they are. However, it’s worth explaining the reasons why in a bit more detail, so I’ve broken them down below.

Now that we know the claims made by EMF pendant manufacturers, we can look at why they’re not true. The biggest issue is that there’s a level of truth behind the claims, and for some, this is unfortunately enough.

However, with a bit of digging, you can confirm that there are flaws in their logic. These are my biggest issues with the claims made by EMF pendant manufacturers:

While the ability to create a field of energy isn’t impossible – for example, magnetic fields – the idea that one can be created by a pendant is fairly ridiculous.

While energy fields don’t necessarily require a power source, a pendant made from a small piece of the mineral isn’t going to be able to create a field on its own, least of all one that can convert or neutralize EMF radiation.

As mentioned, pendants claim to attenuate EMF radiation as it passes through the material. While this is an acceptable claim to make, it’s made redundant by the very size of the pendant.

After all, what good will a 1-inch piece of mineral do when it comes to attenuating EMF radiation? It’ll only attenuate energy that passes through it, meaning that the small circle of your chest where the pendant sits will be slightly more protected than everywhere else.

Myth#2: A single pendant will protect your entire body

Another big claim made is that a single EMF pendant worn around your neck (or connected to a device) will be enough to protect your whole body. This, of course, is another lie.

After all, how can a small piece of mineral protect your whole body? To create an energy field large enough to cover you, the pendant would probably need a fairly large energy source, which would make it completely redundant anyway.

EMF waves travel in straight lines, too, so how is a pendant worn around your neck meant to protect your back? Again, it would require a large energy source to create a large enough field.

The only way to protect your whole body from EMF radiation is to cover your entire body, such as with a bed canopy. The bottom line is that any part of your body that’s not covered by a shielding device will be exposed to EMF radiation.

Myth#3: A single pendant can protect you from all EMF radiation

Perhaps one of my favorite claims made by EMF pendants is that their device can protect you from all wavelengths of EMF radiation. Generally speaking, this is a lie, although products do exist that’ll block all EMF radiation.

While this isn’t a hard and fast rule, it’s applicable enough to EMF pendants. That said, even better designed protection products will generally never advise they can block out all wavelengths of EMF radiation.

Myth#4: Shungite pendants are the most effective

Shungite is often regarded as one of the most effective materials to make into EMF pendants, along with minerals like black tourmaline. Shungite does have some interesting properties when it comes to blocking EMF radiation, but there’s a caveat.

Shungite comes in several grades of purity, with grade 1 being the purest and rarest form. This is the only grade of shungite that displays any kind of EMF blocking properties, and you can be sure that it’s not what you’re being sold.

Grade 1 shungite is so rare and expensive that you won’t find it outside of industrial settings. The lower grades are still useful, however, but only for things like purifying water or neutralizing acids.

As you can see, there are a number of reasons why EMF pendants don’t work. While I won’t argue with the scientific theory behind them (after all, attenuation is a thing), it’s wrong to claim that such a small pendant will protect your whole body.

The bottom line is that if you want to protect yourself from EMF radiation, you either need to block it at the source, such as with an EMF phone case, or shield your whole body in a protective material, such as a Faraday cage.

Ways to protect against EMF radiation 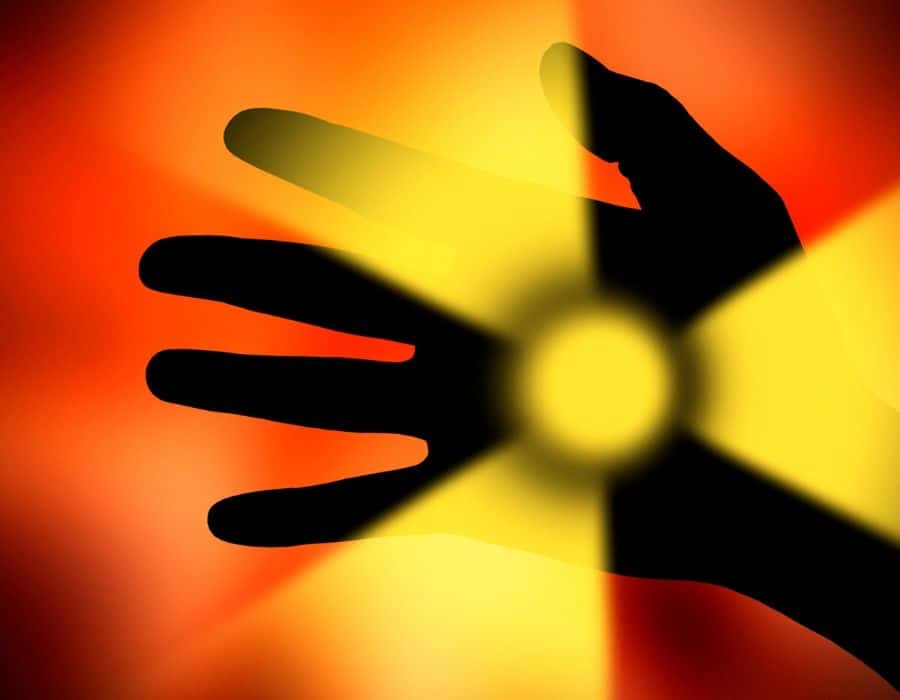 On that note, here are my top methods for practically protecting yourself from EMF radiation. The important thing to remember is that you’re unlikely to 100% shield yourself, but the more methods you try, the higher your protection levels will be.

The first step, if you haven’t already, is to buy an EMF meter. I recommend the Trifield TF2 (check price on Amazon). Read my review to know why I love this meter.

Only once you know EMF radiation levels in your home can you start taking practical steps to reduce them.

Another thing to bear in mind is that EMF protection strategies are more successful when applied to the source of the radiation. This is especially true in your home, where you might have radiation coming from a number of devices.

For example, shielding your Wi-Fi router (and turning it off at night) and fitting a Faraday cage around your smart meter are both excellent ways to reduce your overall EMF radiation levels in your home.

The other option is to buy an EMF shield for devices like your laptop and phone (check out my recommendations). These should have metal mesh and other materials to block the radiation, rather than neutralize or convert it.

If all else fails and you’re unable to use any shielding methods, the next best option is to keep your distance from the source of the EMF radiation. This is most applicable to things like cellphone towers but is also true for devices around the home.

For example, you should always try and stay around 15-20ft away from your Wi-Fi router, and around 40ft away from a smart meter. Similarly, don’t stand near a microwave when it’s on, and limit the time you spend sitting in front of your computer.

EMF pendants are often marketed as a simple and effective way to reduce EMF radiation exposure. However, as I’ve found, there are a number of flaws in how they work, and so I recommend avoiding them completely.

If you’re concerned about EMF radiation, spend some time doing research and develop a practical strategy for reducing your overall exposure. This will be much more beneficial than buying an expensive pendant.