Are train lines a source of EMF radiation? If you are wondering whether it is safe to be in proximity to the train lines for long periods, this article is for you.

Living near train lines, traveling a lot by trains or working near the train lines—all these situations can expose you to EMF radiation.

For people visiting the train stations, the EMF radiation may not be very damaging. But if you are living close to train lines, or work near them, it will increase the duration of your exposure.

The Train Technology Across the World

The train systems in the railway are rail vehicles that help in transporting people and goods. The electronic trains are more commonly used for regional travel and long-distance.

When we talk about trains, we include the whole package that comes with it. In that we include:

In a regular train system, a locomotive leads the train cars carrying people and freight. The train tracks steer the train and the switches and signals control the train traffic.

Transformers transfers the current from the lines. An AC or DC then helps in driving the motors.

What is the Third Rail in the Train Lines?

All-electric train systems in the world use an electrified third rail. The third rail supplies power to the train. Although, in appearance, the third rail looks like a regular train rail. However, it is electrified.

A very strong electric current passes through the third rail. It is enough to injure or kill someone.

The voltage that Train Lines Use

Numerous voltage levels are used across the world. However, only a few voltage levels have more widespread use. Train systems use both AC and DC systems.

Generally, 600-650 and 750V are the most commonly used voltages. Tramlines, train lines, commuter lines use this voltage.

In electric train lines, a third rail or overhead lines supply the train with voltage. For train systems, 25 kV is most internationally used as a standard.

The overhead lines supply the alternating current (mostly as single-phase) to the train system.

To measure the EMF radiation levels, technicians do the following:

Another source of the magnetic field is the inductors or solenoids. The inductors and solenoids are in the control circuitry in the motors on a train.

In an electric train with multiple units, there are some motors in at least a few train cars. The supply current circuit systems are under the floor. Therefore, you can expect a very strong field close to the floor in a train.

In trains hauled by a locomotive, the circuit system is found in the locomotive. Therefore, passengers are not exposed to EMF radiation.

EMF Radiation from the Lines 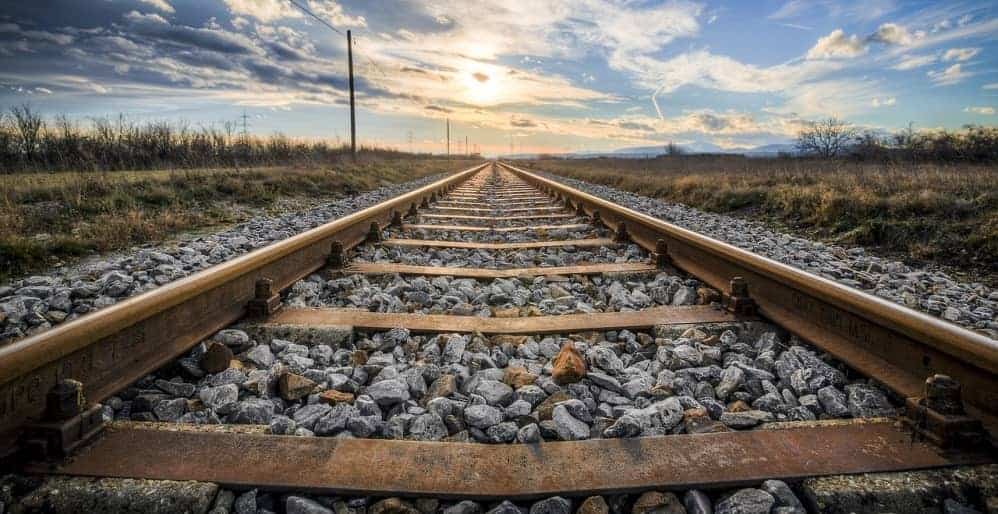 When you are on the platform, EMF radiation comes from the sources around. For instance,

Electric current flows through train lines (including third rail or overhead lines) at all times. The current flow even when there is no current flowing them because they are never turned off.

Therefore, an electromagnetic field exists around the train lines at all times.

Is it safe to be around Train Lines?

If there are train lines in your vicinity, you should learn about the possible issues that may arise if you aren’t careful. This is also important for families living near train lines.

According to the Rail Safety Guide,  the third rail (or overhead train lines that are conductors) carry electricity to the electrification trains. The normal value of current passing through the third rail is 750 Volts.  The overhead lines carry 25 kV.

These values are 100 times higher than the voltage coming from the power supplies in your house. The current is high enough to electrocute someone.

In the UK, almost 70 people have been electrocuted due to the third rail, in the last 10 years.

Lightening Jump from the Train Lines

You don’t have to touch a train line to get electrocuted. If you are flying a kite or dangling things near the overhead train power lines, it can jump you!

The electricity will sweep like lightning and jump the person up to almost 3 meters.

According to a UK-article called ‘Buying an EMF Safe Property-Electrified Railways‘ (2017), most railway lines in the UK are electrified. The overhead rail line, as well as the third rail line, produce high magnetic fields.

They expose rail travelers to harmful EMF radiation. The EMF fields from train lines have been associated with a rise in the risk of a miscarriage in women traveling through trains regularly.

It is recommended to be careful especially in the first three months of pregnancy.

Besides EMF radiation and electric current, another problem when living or working near train lines is chemical pollution. It can lead to a lot of health problems ranging from asthma, breathing difficulties to other issues.

What is Electromagnetic Field Disturbance near Train Lines?

As I have mentioned earlier that an Alternating current (AC) is used in trains that have to cover a longer distance. The reason is that an AC voltage is relatively easier to transmit over long distances.

Comparatively, the Direct current (DC) is frequently used for shorter train lines like in urban systems and tramways, etc.

However, some rail companies use Direct Current (DC) voltage to power the trains on the 3-rail train systems. When trains draw power from the motor, it results in a very intense magnetic field disturbance.

In some cases, such disturbances have caused many problems in properties within 30 meters of the train lines.  For instance, if you play a television in such a house, the strong magnetic field disturbs the colors of the picture.

How to Stay Safe around Train Lines?

Stay at a distance—if you have to work around the train lines, it is recommended to keep a safe distance from the electric rail lines.

According to the Occupational Safety and Health Administration (OSHA), workers need to maintain a distance. They require that equipment should be kept almost 10 feet away from the power lines with a voltage ranging from 10 to 50kV.

For train lines, the most common voltage value is 25 kV. Therefore, whether you are working near the train lines or residing near them, maintain a safe distance of 10 feet from the third rail line and overhead rail lines.

Overhead power lines in an electrified railway produce high levels of the EMF fields, especially near the lines. They produce both fields: the electric field from the overhead lines (25 kV) and the magnetic field from the current that the train draws towards them.

Since the supply line (overhead rail lines) and the return (third rail line) are separated, the magnetic fields they produce have to travel a greater distance.

How to make sure your property is at a Safe distance from Train Lines?

Already living near train lines or planning to buy a property near railway lines?

Here is what you need to know about the EMF radiation from the railway lines.

As you know that the intensity of EMF radiation decreases as the distance increases. Therefore, the magnetic field reduces and becomes less harmful.

If you are wondering how to measure the distance needed to reduce EMF radiations, here is the answer.

The optimum distance required to reduce the values of EMFs is measuring in a straight line between the overhead rail lines and the place where people will be working or staying. Or, in your case your house or garden.

Even a distance of 30 to 50 feet helps in reducing the impact of the fields.

However, if the rail line is in a cutting, the overhead power lines can still cause a problem. In such a case, if the house is closer than 30 meters to the railway line, it is better to find the exact measurements of the EMF fields.

Compared to the overhead rails, an electrified railway that is powered by the third rail will not produce higher EMF radiation.  Therefore, a property that is at a reasonable distance will be safe.

A safe distance, in this case, will be 10 meters. However, houses that are built very close to the railway lines (closer than 10 m), will face a high-intensity of transient EMFs when the train will pass through the tracks.

In the case of the third rail, if the railway is in a cutting, the EMF fields from the third rail will be very lower. They will be even lower than the EMF radiation by the third rails when they are in level with the property.

The reason is that in the case of a railway with cutting, the earth will absorb most of the EMF radiation that the third rail produces.

The train lines in an electric train system produce EMF radiation. You can stay safe from them by staying at a safe distance. It is especially important for those living or working near train lines.

I hope this article will provide you all the information that you need about EMF radiation from train lines.