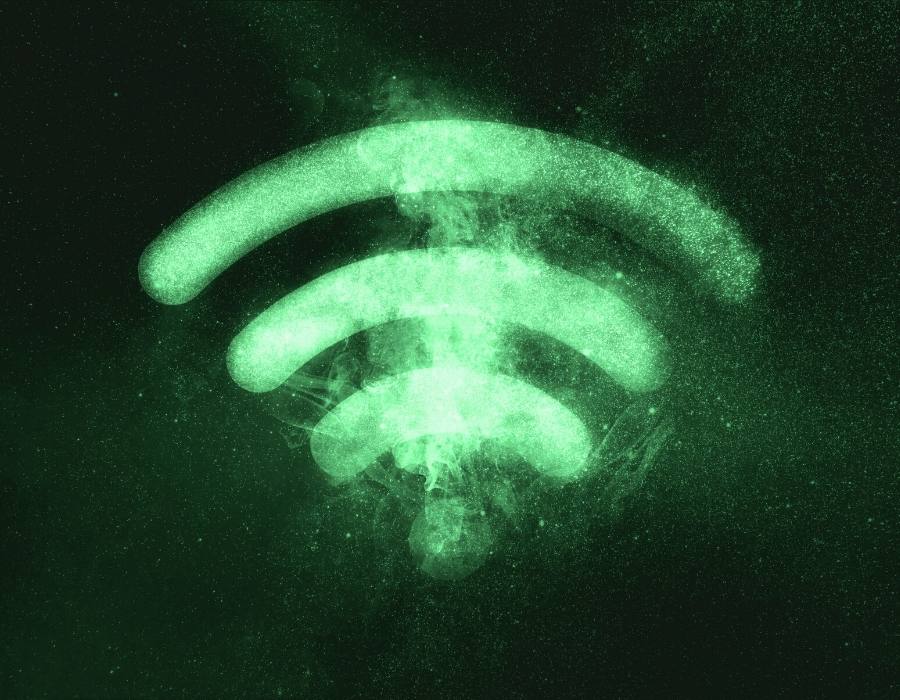 While we can all appreciate the benefits of Wi-Fi, we must also consider the potential dangers of being exposed to its EMF radiation. If you’ve ever wondered how to block Wi-Fi radiation then you’ve come to the right place. Here’s a quick answer:

The best way to block Wi-Fi radiation is to install something that’ll attenuate at least 99% of the device’s EMF radiation. The best way to do this is with a Faraday cage or EMF blocking material. However, bear in mind that that’ll render your Wi-Fi inactive.

Blocking your Wi-Fi router’s radiation is just one way of managing the problem, however. In this article, I’ll run through the best ways to block Wi-Fi radiation in your home, or at least how to manage the problem effectively.

In short, it’s because Wi-Fi routers produce EMF radiation. While EMF radiation covers everything on the spectrum from gamma radiation through visible light to infrared radiation, Wi-Fi signal falls in the radio frequency part.

This means your router gives off the same kind of radiation as a cellphone, cellphone tower, or Bluetooth device. Granted they work at different frequencies, but they effectively work on the same technology.

The WHO lists EMF radiation as a potential carcinogen, which is due to the fact that non-ionizing radiation can cause mutations in DNA. This is effectively what cancer is.

However, that’s not the only potential danger of being exposed to EMF radiation. Other health impacts include:

There are plenty of other symptoms related to EMF exposure, and many people experience it differently. That’s why it’s so hard to pin down as an issue, as the symptoms can be quite general.

As you can see though, constantly being exposed to sources of EMF radiation can be potentially harmful. We’re all told about the dangers of living near a cellphone tower, and realistically Wi-Fi routers are no different.

Wi-Fi routers generally work on different frequency bands, but most will have at least 2. These will usually be 2.4GHz and 5GHz.

The different frequencies are designed with different capabilities. For example, 5GHz is a higher frequency and so can provide faster data transfer, but at a shorter range.

All that we need to really know regarding Wi-Fi frequencies is that 5GHz is more damaging. Its higher frequency means it’s more likely to cause oxidative stress, which this study links to a range of health complications.

However, if you think that protecting yourself is as simple as turning off the higher frequency bands, you’d, unfortunately, be wrong. Not all routers have this function, as they generally automatically switch between the 2 depending on what’s needed.

The bottom line is that to truly protect ourselves from Wi-Fi radiation, we need to block it. In an ideal world, we’d also block all the signals from our neighbor’s routers too, but that would be incredibly difficult.

If blocking is impossible for any reason, then my next recommendation would be to limit your exposure as much as possible. I cover both options in this article, so hopefully, there’ll be something here that’ll work for you.

My first option for blocking Wi-Fi radiation is to install an RF blocking shield (Amazon). Different companies will use different materials, but the shield should always be made from a conductive metal.

Ideally, an RF shield should block almost all of the RF signals given out by the router, but should still allow it to function. After all, a router is fairly useless if it can’t give off a Wi-Fi signal.

It’s worth bearing in mind that when trying to protect yourself from Wi-Fi radiation, your options will either be to let some of the signals escape or to block off the router entirely.

An RF shield that blocks 99% of radiation obviously still lets 1% through. This is a massive reduction in the amount of EMF radiation you’ll experience in your home. However, if it’s not enough and you want 100% blocking, then try a different option.

What makes an RF shield a great choice is that you can remove it whenever necessary. This makes it a great temporary choice if you don’t feel you need one all the time.

If you want to completely block Wi-Fi radiation, the best option will be something like Faraday fabric. This is essentially a highly conductive material that blocks the signal and grounds the router.

This fabric comes in sheets, so you’ll have to build some kind of cover or case for your router. However, that’ll be fairly easy as the fabric can be folded or arranged into whatever shape you need.

As opposed to the RF shield mentioned above, this product will completely block the Wi-Fi signal, including the bit you actually need. But if your goal is to completely block your router’s signal, that’ll be a good option.

While you could make a router cover from this fabric, it’d probably be more useful for protecting a specific room or area. For example, fitting Faraday fabric in your bedroom will protect you from all sources of EMF radiation, not just from your router.

3. Use a router cage

Another viable option for blocking Wi-Fi radiation is to use a router cage. These are effectively Faraday cages designed specifically for routers. Their purpose is to completely block EMF signals from escaping.

They do this by attenuating most of a router’s EMF radiation, and some may be connected to a wall outlet’s earth socket. However, this isn’t always the case.

One of the best features of a router cage is that they allow you to continue using Wi-Fi in your home. Most manufacturers state that the cage will have an impact on Wi-Fi signal distance, reducing it by as much as 40%.

While this won’t have an impact on those living in small properties, it’s worth considering if you live in a larger house. Most Wi-Fi routers are powerful enough to send a signal 30-40ft, so bear this in mind.

A router cage will be a good option if you want to reduce EMF radiation at the source while still using the Wi-Fi signal. However, if you want to completely block all RF signals, look for a different product.

A good option if you’re looking to block EMF signals from entering a particular room is to use EMF blocking paint. Rather than applying this solution directly to your router, the idea is to shield a certain room from various EMF signals.

This paint contains metallic particles that help to attenuate EMF signals, preventing them from entering a space. Some brands are more effective than others, but probably the best on the market is Y-Shield.

EMF blocking paint is expensive, however. If you want effective coverage in a room then you’ll need to paint all the walls, and possibly the ceiling too. This could become fairly expensive, as you might need to apply several coats.

It’s also worth mentioning that this paint isn’t a topcoat, so you’ll need to paint over it. Therefore I’d only really recommend it as an option if you were thinking of redecorating anyway.

EMF shielding paint won’t completely block all signals. Some manufacturers claim to block up to 99.8% of EMF signals, but this will vary depending on the application and environment.

While this is a fairly costly option, it might be worth considering if you want an EMF free room and are in the process of decorating anyway.

Other ways of managing Wi-Fi signals 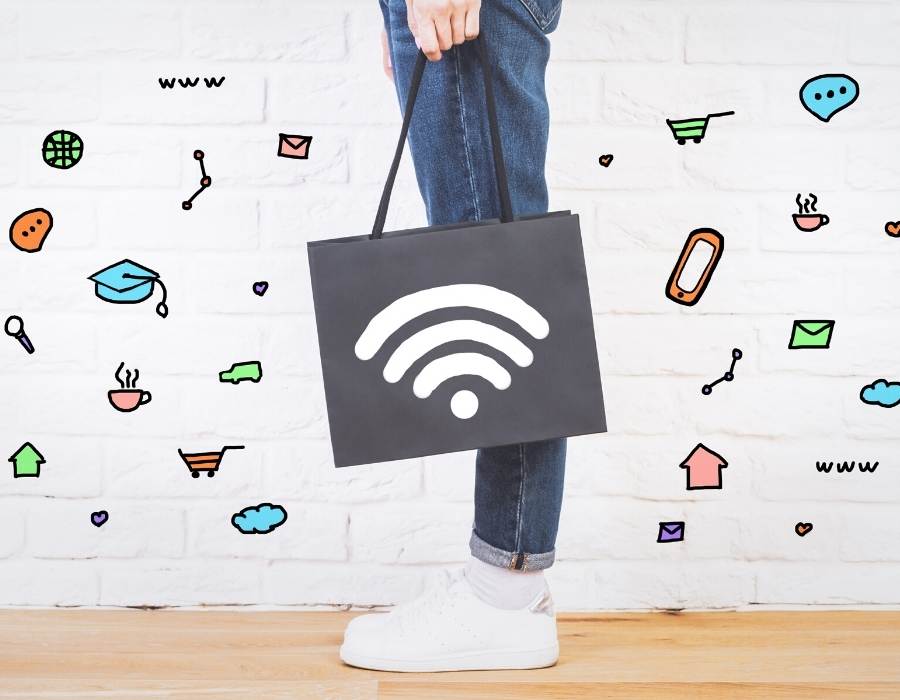 As I mentioned earlier, completely blocking your router’s signal isn’t always a viable option. For example, some EMF blocking products are fairly expensive, so you might want to look for other options.

There are ways of managing the Wi-Fi signal without installing an EMF blocking device. Below are my most helpful tips for reducing your exposure to Wi-Fi signals that don’t involve installing new products.

This might seem like an obvious suggestion, but it’s also the most effective. Simply turning your router off will stop 100% of the signals it produces.

I recommend doing this at night when you won’t be using the router, as this is also the longest time you’ll be exposed to the signal. If your main goal is to reduce your exposure to EMF radiation, this is a great way to do it.

Rather than manually turning it off every night, consider connecting your router to a timer plug. This will turn it off and on at the same times every day and saves you having to remember.

Some routers give you the option to set a timer in their settings, and the advantage of this is that it’s more secure. If you have kids that enjoy late-night internet surfing, that’ll be the better option.

However, bear in mind that this technically won’t block the signal; it’ll remove it. Therefore you still have to consider your neighbor’s Wi-Fi signals, although you’ll have removed what’s probably the strongest signal in your home.

2. Use a wired connection

I imagine many of us are old enough to remember the days before wireless internet. However, many people overlook this as an effective option for reducing your exposure to RF radiation.

Hardwiring your devices to the router means that you can turn off the Wi-Fi signal, which will make a massive difference to your exposure levels. What’s more, it’s really not difficult to do.

Although the process is fairly easy, you can check out this guide for more specific information.

The main advantage of this option, other than a reduction in RF signals, is that it actually provides a higher speed connection than wireless. This can be a big help for things like streaming and gaming.

Obviously, this option can be challenging if you have lots of devices. Also, it’s worth considering the fact that you won’t completely block all EMF radiation, as the router will still give off heat and possibly some radio signals.

The final bit of advice worth mentioning is that keeping your distance from a source of EMF radiation is still effective. While we would ideally completely block EMF radiation at its source, this isn’t always possible.

EMF radiation follows something called the inverse square law. In short, this means that the further away you are from a source, the less intense it is. For example, if at double the distance from the router, the signal strength is reduced by 75%.

For a Wi-Fi router, you’ll be fairly safe from the most potentially harmful signals once you’re about 30ft away. This does mean you’ll still be exposed to some level of EMF radiation, but nowhere near as much.

Granted, this isn’t an ideal way to deal with EMF radiation, but it’s worth knowing for times when you don’t have another choice.

To truly test this, I’d recommend buying an EMF meter so you can actually test radiation levels in your home.

Blocking Wi-Fi signals often means having to sacrifice using wireless internet. However, as I’ve shown, there are ways around that problem that don’t increase your level of risk.

Hopefully, this article has demonstrated that there are different ways of managing the issue of Wi-Fi radiation in your home, meaning you can stay healthier.