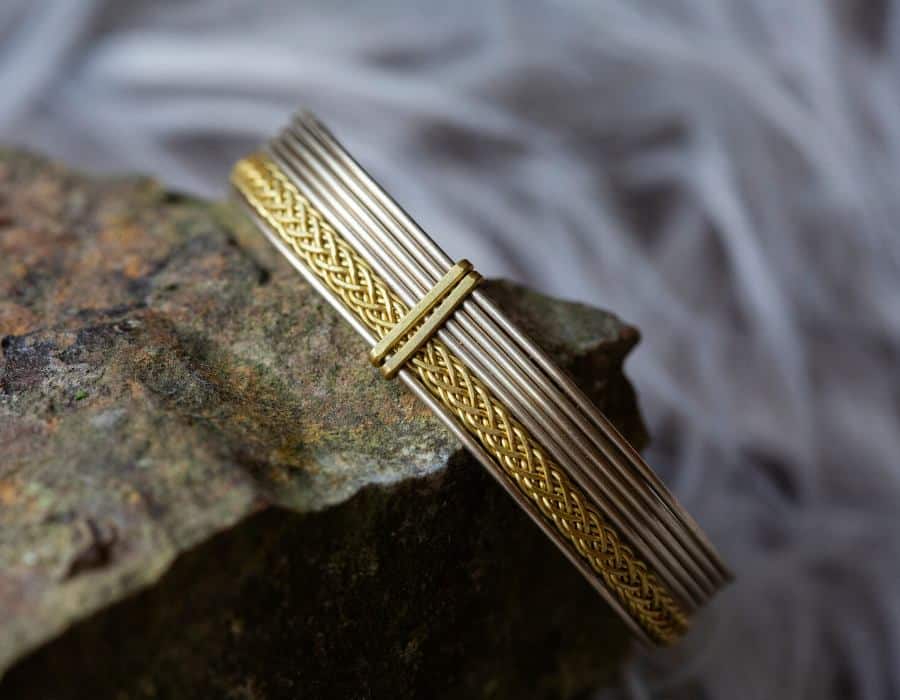 If you’ve been looking for ways to combat EMF radiation, you might have wondered, “Do negative ion bracelets work against EMF radiation?” I’ve spent time doing the research so you don’t have to. Here’s a quick answer:

Negative ion bracelets, unfortunately, don’t work against EMF radiation. They claim that the negative ions get absorbed through your skin to combat the effects of EMF radiation exposure which isn’t possible, and most importantly, they don’t affect EMF’s initial impacts on the body.

In this article, I’ll look in more detail at what negative ion bracelets are, how they claim to work against EMF, and how you can actually protect yourself from radiation exposure.

What are negative ions?

Before we get into the specifics of how a negative ion bracelet works, it’s first worth understanding what we mean by negative ions.

Simply put, negative ions are atoms with fewer protons than electrons. This means that they have a negative charge, which in turn means they become magnetically attracted to other things.

Negative ions are a naturally occurring thing, and can be found in the following:

There have been some studies on the health impacts of negative ions, both positive and negative. One study found that negative ions react with bodily tissue and DNA, sometimes in positive ways.

A different study from 2015 found that exposure to negative ions could have short-term positive impacts on cognitive ability. A complete review of work on negative ions found that they can impact us in the following ways:

The bottom line is that negative ions may very well have some positive impacts on our health. However, this doesn’t mean they’re effective against EMF radiation.

Read my article on which EMF products work.

What does a negative ion bracelet do?

A negative ion bracelet claims to work by exposing you to a source of negative ions. This is generally in the form of particular minerals or metals. These can include things like tourmaline, zeolite, titanium, and others.

Many of these substances do have some kind of electrical charge of their own. However, to produce negative ions in the quantity required, they often need to be exposed to heat or pressure.

According to manufacturers, simply wearing the bracelet provides enough heat to produce negative ions. This is known as pyroelectricity, which is when a substance gives off an electrical charge when heat is applied.

Once the bracelet starts giving off negative ions, these are then meant to either be inhaled or absorbed through the skin. They will then make their way into the bloodstream, where they react with various bodily processes.

The claim is that, once, inside your body, negative ions will help to produce serotonin, a lack of which is linked to a number of mental health conditions. They also claim to reduce blood pressure and remove free radicals from your system.

However, there isn’t enough evidence to confirm this is true. What’s more, even if negative ion bracelets did work, their effects don’t align well enough with EMF radiation to make them effective.

In terms of their use against EMF radiation, manufacturers claim that they disrupt EMF radiation fields. However, as many of us know, this isn’t possible in the form of a small bracelet worn on the wrist.

Do negative ion bracelets give off radiation?

Something not many wearers of negative ion bracelets consider is whether the bracelet itself gives off radiation. This is ironic considering they’re often used as an EMF radiation shield.

Negative ion bracelets might give off their own radiation. However, this depends entirely on what materials are used. Some of the minerals used to create negative ions are naturally occurring sources of radiation. These can include things like uranium.

Perhaps some small consolation is that negative ion bracelets don’t give off EMF radiation. That said, they’re recognized by health bodies as sources of ionizing radiation, which is the same kind found in radioactive materials.

Bear in mind, however, that this isn’t the case for all negative ion bracelets. As I mentioned, it depends on the materials used, and whether these are natural sources of radiation.

While they’re never going to give off “dangerous” levels of radiation, wearing one all day every day isn’t going to do much for your overall health. This is just another reason why you should stay away from them. 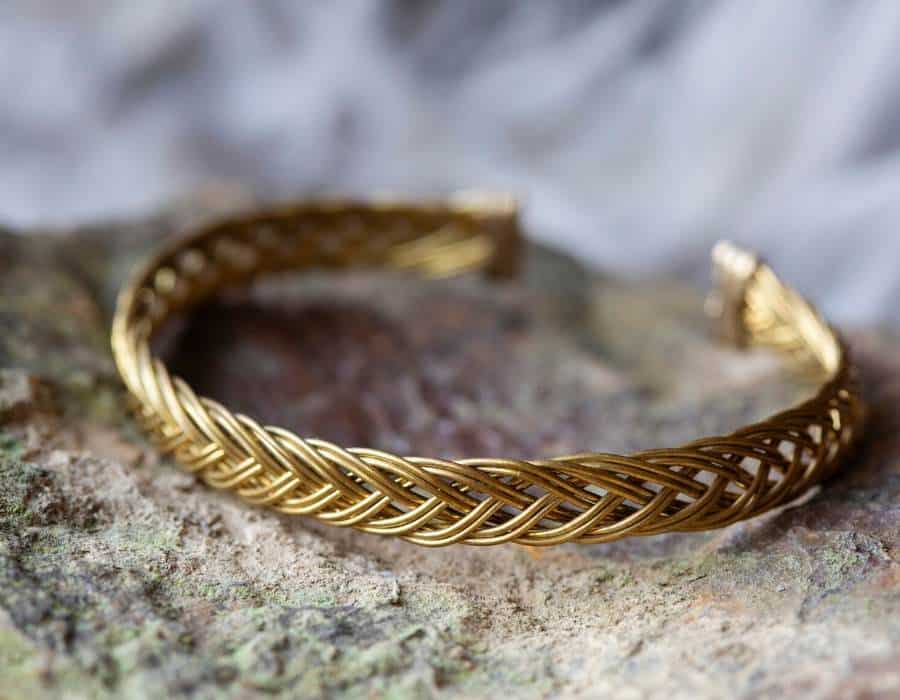 Considering many manufacturers of negative ion bracelets don’t say specifically how their products work against EMF radiation, we have to make a few assumptions.

In fact, many claim to improve your body’s “rhythm” or “vibe”, which isn’t particularly useful information.

It’s probably fair to assume that negative ion bracelets are believed to work against EMF radiation in 2 ways:

Let’s go through why these claims would be incorrect.

Many devices claim to block EMF radiation or create a shield around your body. What makes this a wild claim is that these devices are often tiny, such as a pendant or bracelet.

It’s impossible to disrupt an EMF radiation field with such a small device. Even if the materials used were able to block EMF radiation, they would only do so for the part of your body they’re covering.

Therefore, for a negative ion bracelet to be effective, you’d have to be covered in them. This, of course, wouldn’t be the most practical solution to the problem of EMF exposure.

Free radicals are an industry term for volatile atoms found within your body. They become volatile when their outer shell is missing electrons, causing them to bond with other atoms.

This is actually something that negative ions can be effective against. This is because the negative ions bond with the free radicals, which renders them inert. In short, they’re no longer looking for other atoms to bond with.

However, negative ion bracelets aren’t an effective way to combat free radicals because they’re simply not powerful enough. Even if they produce negative ions, they won’t do so in quantities large enough for them to be effective.

A much better way of fighting oxidative stress (the effect of free radicals) is to focus on your diet. In fact, there are plenty of diets tailored specifically to help you detox from EMF exposure.

When we think about how negative ion bracelets would work against EMF radiation, it’s easy to see that the claims they make are incorrect. As usual, it’s best to stick with tried and tested methods for reducing your EMF exposure.

Rather than spending your money on things like negative ion bracelets or EMF pendants, it’s better to stick with traditional methods. Here’s a quick rundown of my preferred methods for reducing EMF exposure.

You might have heard the term before, but Faraday cages are simply metal cages put around objects. Doing so blocks any magnetic field they might produce, which effectively combats EMF radiation in your home.

For example, this smart meter cover is ideal for eliminating EMF radiation emitted by the device. You can also buy similar ones for your Wi-Fi router and other devices.

This might seem obvious, but don’t underestimate the power of turning your devices off at night. Doing so will massively reduce EMF radiation levels in your home, which is especially important while you’re asleep.

Be sure to unplug devices rather than just turning them off. Similarly, do everything possible to make your bedroom into an EMF free zone, as this will likely be where you spend the most time in a single location.

If you don’t own one already, get an EMF meter. This is the only way to officially confirm levels of EMF radiation, rather than just going off a list of problem devices.

Using one will allow you to monitor levels in your home so that you can then put together an effective strategy.

If you’re unable to shield properly from a source of EMF radiation, the next best option is to keep your distance. While it’ll be different distances for different devices, they follow the inverse square law.

This means that intensity drops with distance. For example, being twice as far from a source of radiation reduces its intensity by 25%. Keeping your distance is sometimes the only option available.

The bottom line is that negative ion bracelets aren’t effective against EMF radiation. While they might hold some health benefits, the fact that they may be a source of radiation themselves makes them potentially dangerous. You’re much better sticking with methods that actually work.