You may have heard of various processes and elements that emit radiation, such as CT scans and sunlight–but what about radiation emitted in your own home?

With the relatively new phenomenon of WiFi becoming increasingly normalized and accessible around the world, people are getting exposed to various levels of radiation at closer ranges. WiFi routers and extenders play a central role in this. 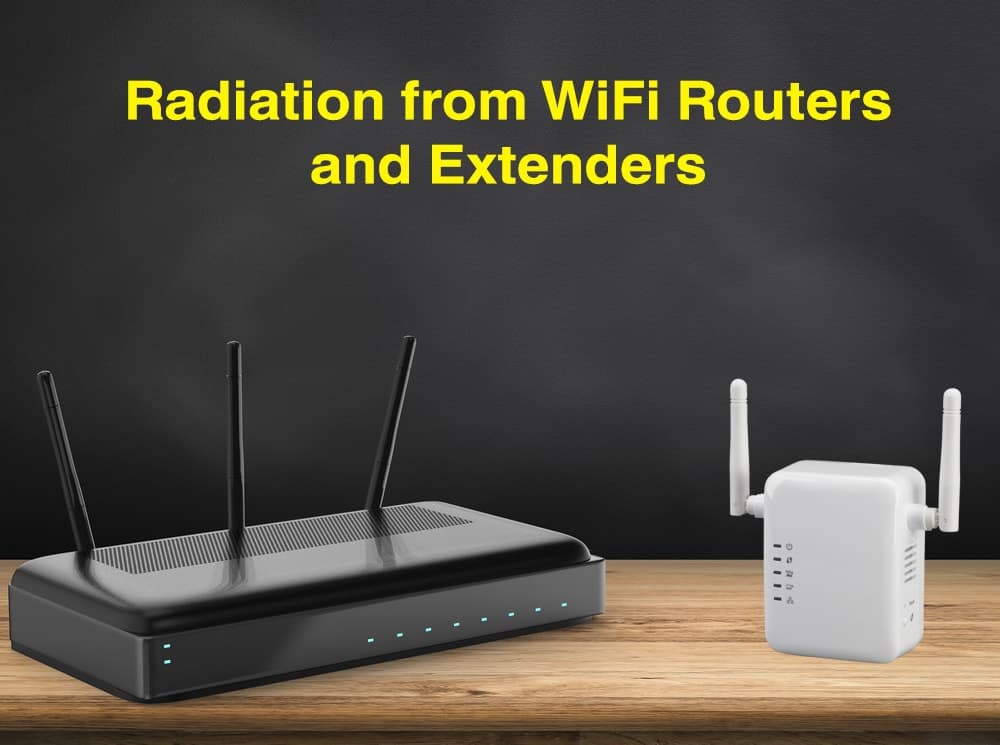 Radiation is all around you. At certain levels and from certain sources, it can sometimes even be beneficial to your well-being. Exposure to the sun’s rays, for example, at low and short doses, can boost your health.

The emission of radiation from WiFi routers and extenders, however, is not especially beneficial to your health. Even at low frequencies, prolonged close-range exposure to this type of radiation can lead to negative health outcomes.

WiFi routers and extenders use radio frequency (RF) energy to be able to connect devices to the internet. As mentioned above, this gives off electromagnetic radiation (EMR). The frequency of gigahertz emitted is relatively low, but it is enough for you to be able to absorb it.

WiFi boosters, also known as WiFi extenders or repeaters, emit radiation as they provide a catalyst for the frequencies to reach more far-fetching areas of a designated space.

So, are they safe? In short, not really. Even if boosters are not within close vicinity, the waves can travel through walls and spread out. Exposure to this radiation can lead to a number of health issues:

Have you ever gone to someone’s house for the first time, and when trying to connect to his or her internet, you discovered a whole list of other nearby WiFi names? All of those different connections are giving off EMR. They may be next door or even across the street, but this means that in essence, you are surrounded by this radiation, which is not good.

WiFi boosters are especially detrimental as they bring the radiation closer to the areas in your homes where you tend to spend the most time in. This means that exposure to this radiation can remain constant for long periods of time.

Type of Radiation Emitted From WiFi

According to the International Atomic Energy Agency (IAEA), there are four common ionizing radiations that are generally talked about:

*Please see the linked source above for further information on the different types of radiation.

Electromagnetic radiation (EMR), the type that is emitted from WiFi routers and extenders, falls under the gamma-ray category. The main difference between the four types of radiation is the amount of energy they contain, and to what extent they can be absorbed by people and objects.

What sets EMR apart from other forms of radiation is the fact that it is non-ionizing. Unlike sunlight and CT scans, for example, which are ionizing (meaning that they can directly break or alter your DNA), EMR does not carry enough energy to directly impact you in this way.

How Does Low-Frequency EMR Negatively Impact Us?

If electromagnetic radiation is non-ionizing and does not hold enough energy to alter your DNA, then how can it be detrimental to your health?

As previously mentioned with the discussion of safety, the main issue is prolonged and close-range exposure. The World Health Organization (WHO) considers this type of man-made energy to be harmful to your health and overall well-being.

World recognized medical scientist, best-selling author, and attorney Dr. George L. Carlo believes that WiFi radiation can indeed cause illness in human beings. He explains that there is a biological response to what he calls Information Carrying Radio Waves (ICRW), which comes from all wireless devices. When exposed to ICRW, a process of adaptation and compensation occurs in the body, which literally changes your system.

In one of Carlo’s papers on the study of real and simulated mobile phone exposure, he writes:

“…man-made EMFs constitute a very new stressor for living organisms within the billions of years of biological evolution…cells have not developed defensive mechanisms, for example, special genes to be activated for protection against electromagnetic stress of man-made EMFs.”

He goes on to say that this may be the reason why cells are found to activate “heat-shock genes” and “produce heat-shock proteins very rapidly,” much more rapidly than for heat itself, in response to man-made EMFs.

Due to this high-intensity stress on a cellular level, a multitude of negative health effects can result. Aside from the health issues previously listed, this alteration in the body’s DNA from radiation can also cause issues with fertility and may even lead to the development of cancer.

At What Level Is Radiation Harmful?

Exposure to radiation at lower doses and dose rates can still enable some degree of recovery in cells and tissues. That said, when exposure gets to the more moderate level, cell renewal may not be as feasible, let alone efficient. Exposure to high doses of radiation can lead to death within a matter of days (an example of this level of radiation is the atomic bombings of Hiroshima and Nagasaki).

You can use EMF meters (my review of the best one), devices that measure electromagnetic fields, to determine specific levels of radiation, but in general, high-speed WiFi routers and extenders are typically on the low to moderate level. It mainly depends on how much space is between yourself and the router or extender at all times, and the strength of the internet connection.

How To Decrease Radiation Exposure

Radiation from WiFi routers and extenders is able to permeate through walls and doors. You may think you are not being affected by a router in a nearby room, but that is not necessarily the case. It is important to find ways to reduce your exposure to these waves as much as possible.

Though Dr. Carlo and many other leading experts on the matter do not think it is unavoidable that everyone will get sick from this exposure, they emphasize the fact that this radiation can and does, in fact, cause sickness.

They also believe that this radiation gets absorbed into all human bodies (not to mention other beings as well) near it, and can alter the structure of your DNA, regardless of whether or not you get negative side effects directly related to exposure.

There are a number of ways in which you can reduce your exposure to EMFs:

At the end of the day, life in the 21st Century typically requires some form of internet access and connection. It is generally not feasible to remove WiFi completely from your home or daily life, but if you take on some of the measures listed above, you will be on your way to becoming less exposed to the harmful effects of EMF radiation.