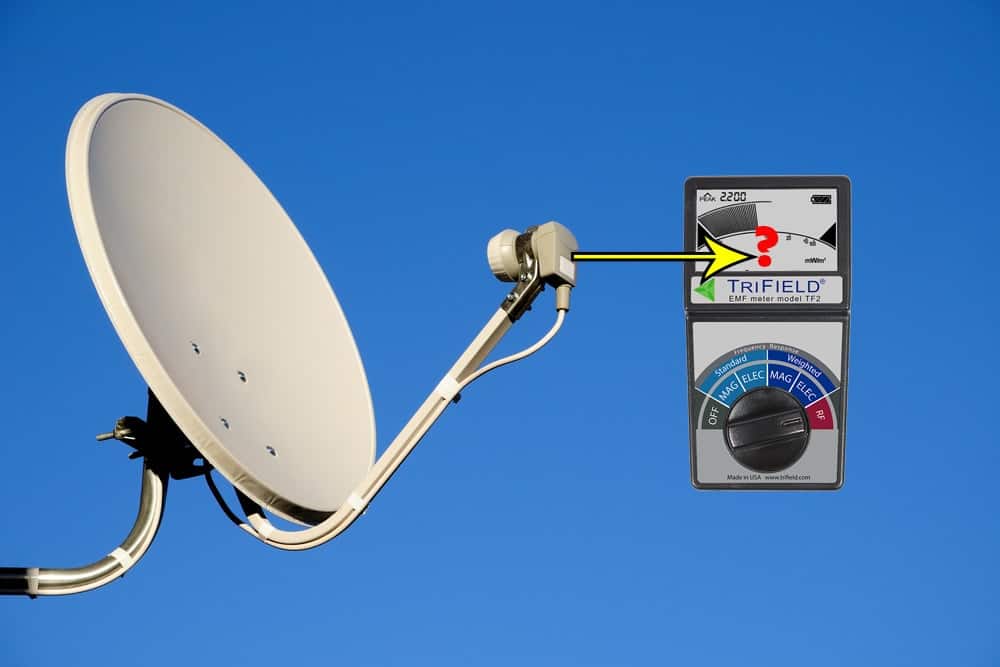 From the phone in our hand to the satellite dish in our house, every gadget exposes us to EMF radiations. When it comes to a satellite dish, there is a lot of speculation about their safety. In this article, I will answer your concerns about emf radiations from a satellite dish.

However, if you have EMF hypersensitivity, you may still be careful of the radiation.

Let us get to it and start learning more about satellite dishes and EMF radiation.

What is a Satellite Dish?

A satellite dish is a device used for transmitting and broadcasting signals. It consists of a parabolic antenna that receives and sends microwave signals.

Satellite dishes make it possible for us to transfer data without using cables or any physical medium.

How does a Satellite Dish Work?

A satellite dish is a type of parabolic and microwave antenna. Therefore, it receives or transmits electromagnetic signals from another satellite.

The satellite dish has a parabolic shape antenna. This antenna reflects the signals to another part of the satellite called Low-Noise Block (LNB).

As you know how a satellite dish works, you can understand that satellites are getting high-frequency and low-frequency signals in the form of:

The EMF radiations that a satellite dish receives constitutes:

Since the EMF radiation comes from the satellite oscillating the earth, it is important to look at the satellite in space as well.

On a normal day, when you are outdoors strolling in a park, and don’t have a satellite dish nearby, you are exposed to the exact weak radiation. And, even when you do own a satellite, the strength of the radiation stays the same as before. This means that they still remain weak.

Are Satellite Dishes Safe to be Around?

Most people keep a satellite dish mounted on the roof or put it on a pole and keep it in the yard. One of the most common reasons is that they are afraid that the signals/waves/radiation coming from the satellite in space is strong and harmful.

Therefore, to avoid the proximity to the EMF radiation, they keep the satellite dish outside. However, this is not the case.

The satellite in the space is positioned at a geostationary orbit which is 22,000 miles away from the Earth. So, if you are sitting in your house in the U.S. right now, the signals that will reach you will be very, very weak.

But, when a satellite dish receives EMF signals, it transfers them to electric signals before amplifying them. These energy waves and EMF radiation are too weak to cause any harm.

However, even weak signals can be a problem for people with Electromagnetic Hypersensitivity or EHS. People with EHS may encounter a lot of troubling symptoms when they are in proximity to a source of EMF radiation.

Later in the article, I will explain what electromagnetic hypersensitivity is. For others, a satellite dish is absolutely safe to be around.

Can Satellite Signals be Blocked?

Do you know the real reason why we have to put the satellite dish on the roof or in the yard?

Well, here is the answer plus good news for people trying to evade EMF radiations.

EMF radiations that are coming from the main satellite in space is very weak. Therefore, it is easy to block it with anything. Naturally, everything from a rock to the tree blocks the signals and stops it from traveling.

Likewise, the materials used in building the house can also block the signals easily. You don’t need any specialized paint coats to block the weak EMF radiation. The regular building materials are enough to block them.

If you need an added shield for protection around a satellite dish unit, keep reading for some great tips.

However, electromagnetic radiation from a broadcasting device can expose you to EMF radiation and cause health issues. A satellite dish collects signals broadcast from the orbiting satellite. It is, therefore, a passive receiver of signals.

The satellite dish is not a source of emitting harmful radiation.

The EMF that surrounds a satellite dish is very harmless. You should not be concerned about radiofrequency exposure.

If you are new to the problems caused by EMF radiation, the next few paragraphs would be useful to you. Otherwise, you can just skip to the end.

What is EMF Radiation?

EMF radiation is an invisible field of electric and magnetic energies. EMF radiation coming from a variety of natural and man-made sources. These include electrical and power sources.

The EMF radiation is divided into two main categories based on their frequencies.

Ionizing radiation can be very harmful. High-intensity rays and long exposure can lead to cellular damage. Sun and X-rays are some of the sources of ionizing EMF radiation.

Some examples of non-ionizing EMF radiation are:

They are considered less harmful. However, for people with electromagnetic hypersensitivity, long exposures can be dangerous. Some sources of manmade non-ionizing EMF radiations are phones, microwave ovens, power lines, Bluetooth devices, etc.

How Harmful is EMF Radiation?

Natural sources like the sun expose us to EMF radiation all the time. Therefore, our bodies have a tolerance for it. However, as we are bringing more electronics and appliances in our lives, we have surrounded ourselves with more EMF radiation than ever.

Thanks to the Internet of Things, the electrical devices, appliances, and tech gadgets are all around us. From the Alexa next to your bed set to the phone in your hand all day, from the monitor in your child’s room to the induction cooker in your kitchen, everything around you is emitting EMF radiation.

According to The World Bank (2017), almost 88.8% of the world population has access to electricity and electrical appliances. This means that we are exposed to more and more radiation now.

There are mixed views on the harmfulness and harmlessness of EMF radiation. Some scientists believe that the amount of EMF that our electronic devices emit is still minimal to actually cause an issue. Therefore, they believe that it is safe to be around them.

However, other studies have proven the harmful impacts of EMF radiation on human health. Many experiments have been conducted to put an end to the debate.

In a Press Release (2011), the International Agency of Research on Cancer classified radiofrequency electromagnetic field as carcinogenic (cancer-causing) for humans.

According to the World Health Organization, both electrical and magnetic fields induce a voltage in the human body. However, these induced currents are too small to cause ant effect or even produce a shock.

According to scientists, EMF can cause disruption on a cellular level and may have an adverse effect on our nervous system. Some common problems caused by EMF radiation are:

Although, a majority of people can thrive with the EMF radiation around them. However, there are some factors that determine the effect of EMF radiation on health.

The symptoms may occur more frequently in people with EMF hypersensitivity.

How to Stay Safe from EMF Radiation?

To avoid any problems and health issues that EMF radiation causes, you must learn how to stay safe from them.

As I mentioned earlier, it is impossible to avoid EMF radiation. They are everywhere from both natural and artificial sources.

However, you can avoid them and reduce your exposure to them.

This is probably the best way to avoid EMF radiation. The EMF radiation from your phone won’t kill you but it is better to stay time away from it. One thing you can do is to dedicate your bedroom as a no-phone, no-electronics zone at bedtime.

You can even spend a few hours every day doing an electronic-free activity.

The satellite dish is not a concern for your health. But if you have EMF hypersensitivity, it is better to be careful.

Keep your Satellite Dish Outside

One of the best ways to use a satellite dish safely is, of course, to keep it outdoors. As I have mentioned earlier, the signals coming from a satellite in space are very weak. It is easy to block such signals and even the walls of the house can be enough. By putting the satellite dish at the roof or in the yard, you can be sure it receives the signals, and it will also be at a safe distance from everyone.

You can use it with any electrical device or tech gadget and block the RF and EMF radiation that may trouble you.

With the advancements in technology (and thanks to the Internet of Things), we wake, sleep, live and breathe with EMF radiation all around us. The studies on the harmful impact of EMF radiation are still an enigma to some and there is an evident disagreement about it in medical science.

However, there is no harm in being a little safe. In fact, when you depart from electronics for a few hours every day, you may save yourself from the harmful effects of EMF radiation.